Nigerians can’t do without comedy 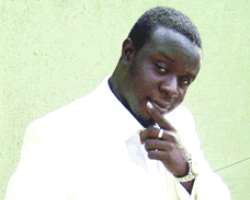 He first came into limelight when he won the AY Open Mic Competition for intending stand-up Comedians in 2006. Since then, Elenu as he is popularly called has not looked back in his quest to be the best in the showbiz. In a recent chat with us, the upcoming act and Computer Engineering graduate who is looking forward to performing in London later in the year at The Nigerian Comedy Show alongside other comedians revealed his mission and challenges in the industry.

Background
My name is Akinlami Babatunde Julius a.k.a Elenu, I am from Ondo state and the first child and only son in the family of two. I obtained an Ordinary National Diploma (OND) in Computer Engineering from the University of Benin, Edo State. Growing up was fun for me because I am sociable, easy going, free at all times and always ready to learn from mistakes.

Turning point
My turning point was in November 2006 when I won the AY Open mic night competition. That was when I got my big break into the industry as I got to perform on Opa William's Show The Nigerian Comedy Show alongside the movers and shakers in the industry, I felt so happy.

Life as Stand-Up Comedian
I have never dreamt of being a stand-up comedian while growing up. I had wanted to be a doctor but somewhere along the line during my secondary school days, I fell in love with computers and I took it up because I was good in the sciences. My Secondary School teachers selected our subjects based on performance. So I was moved to the science class and went ahead to study Computer Engineering in the University. Although I didn't make comedy my life ambition,I noticed I had the ability to make people laugh in school and we called it “yabbing” in those days, I derive pleasure in mimicking people especially comedians and I found myself doing more of that which eventually landed me where I am today.

Comedy in Nigeria
The industry is booming by the day. People are beginning to appreciate comedy more these days unlike the past when comedians were seen as jesters, idle or jobless people who have no plan for the future. Nigerians are now appreciative of the efforts being put in by comedians to make them relax their nerves when they are tensed up.

Memorable Experience
I will never forget the event I attended at Delta State University, Abraka. I went there as one of the comedians to perform and ended up with a blunder. I mistakenly said How una dey without knowing that Warri indigenes hated that form of greeting. It got them angry and they booed me. I got stranded on stage as I continued to struggle to crack jokes and they resisted my efforts. Being a new comer in the industry without any experience on how to handle such a situation, I couldn't flow with them and it was so painful when they started jeering at me.

Coping With Female Fans
I cannot stop female fans and their advances. In Nigeria, no man would wake up to say he wants to go and see a comedy show, it is the females who lure their men to events and that is why we have more female fans in the entertainment industry. The only thing I do is to be courteous with them, and not flirt around with them. Doing anything contrary is unprofessional.

How I get my jokes
I always conduct lots of research. I watch a lot of foreign acts and I get inspiration from my environment at times in addition to studying mannerisms of the rich and the poor. I also take note of people's experiences aside obtaining information on the internet.