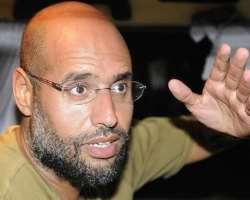 SAIF AL-ISLAM GESTURES AS HE TALKS TO REPORTERS IN TRIPOLI AUGUST 23, 2011.
Listen to article

Muammar Gaddafi's fugitive son Saif al-Islam wants an aircraft to take him out of Libya's southern desert so he can turn himself in to The Hague war crimes court, a source with Libya's National Transitional Council said on Thursday.

A fearful Saif al-Islam, 39, went on the run at about the time his father met a grisly death a week ago, apparently at the hands of vengeful Libyan fighters. He has indicated he is ready to surrender to justice, as has ex-intelligence chief Abdullah al-Senussi, NTC officials have said.

Both men are the subject of arrest warrants from the International Criminal Court, where officials have not been able to confirm any approach. They face charges of crimes against humanity for their response to February's uprising.

Conflicting reports of Saif al-Islam's whereabouts have circulated since he vanished from the Gaddafi stronghold of Bani Walid in the north of the country, with some accounts putting him, and Senussi, in Niger.

Confirmation from Gaddafi's surviving entourage has not been available. One international lawyer who says he represents a member of the family questioned the reliability of NTC accounts but declined comment on the report of a proposed surrender.

The NTC source said Saif al-Islam had not left Libya and was being sheltered by a prominent figure among the nomadic Tuareg people of the desert, whom he had supported financially in the past. The rugged and empty area close to the borders of Niger and Algeria has offered an escape route to others in his family.

However, under ICC indictment, Saif al-Islam would find it harder than his relatives to secure a safe haven abroad.

He was reported by an aide to be fearing for his life when he fled Bani Walid, and if he has seen the gruesome video footage of his father's capture, he is likely to be under few illusions about how he might be treated if he remains in Libya.

"Saif is concerned about his safety," the NTC source said. "He believes handing himself over is the best option for him."

"AIRCRAFT"
The source said Saif al-Islam wanted the involvement of a third country -- possibly Algeria or Tunisia -- in a deal to get him to The Hague. "He wants to be sent an aircraft," the source said by telephone from Libya. "He wants assurances."

Saif al-Islam's whereabouts and intentions had been tracked by monitoring satellite phone calls, the source said, together with information contained in intelligence cables.

The NTC lacks the logistical capabilities to intercept fugitives deep in the desert. It has asked its NATO allies for further assistance after the Western mission winds up following the death of the ousted leader. NATO officials have made clear, however, that they are keen to cut back their commitment now.

Saif al-Islam, often personable, English-speaking and London-educated, had been seen by analysts as his father's heir-apparent and a potential reformer, but his bloodthirsty comments about the rebels this year forced a rethink.

Gaddafi loyalist security officials in Bani Walid this week told how the son called his father frequently by satellite phone and became increasingly afraid of being hit by incoming fire.

"He was afraid of mortars," al-Senussi Sharif al-Senussi, a lieutenant in Gaddafi's army who was also part of Saif al-Islam's personal security team, told Reuters this week.

"He seemed confused."
Senussi, who is not related to Gaddafi's former security chief, said that Saif al-Islam's convoy was hit by a NATO air strike as he fled Bani Walid but he escaped alive.