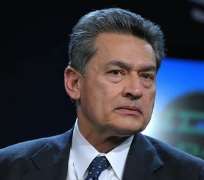 Rajat Gupta, who sat on the boards of some of America's most prestigious companies, was arrested and charged on Wednesday with being the "illegal eyes and ears" for his friend Raj Rajaratnam, the central figure in a broad U.S. crackdown on insider trading at hedge funds.

Gupta, 62, a former director of Goldman Sachs Group Inc, Procter & Gamble and former global head of the McKinsey & Co consultancy, is the most prominent executive to face insider-trading charges since Rajaratnam was arrested in October 2009.

At the start of his court appearance on five counts of securities fraud and one count of conspiracy, the Manhattan federal courtroom was silent but for the sound of Gupta slowly leafing through a copy of the 21-page indictment. It was his first opportunity since he surrendered to FBI agents on Wednesday morning to read the allegations against him.

His defense lawyer entered a plea of not guilty on charges tied to what prosecutors say were Gupta's leaks of Goldman and Procter & Gamble secrets to Rajaratnam in 2008 and 2009. U.S. District Judge Jed Rakoff set a trial date of April 9, 2012 as Gupta sat calmly with his arms folded.

Earlier, another judge granted Gupta's release on $10 million bail, secured by his home in Westport, Connecticut, with travel restrictions. Moments before U.S. Magistrate Judge Kevin Nathaniel Fox walked into the courtroom, a lawyer handed Gupta a salmon-colored designer tie that he knotted swiftly in the collar of his blue dress shirt.

Two weeks ago, Galleon Group founder Rajaratnam, 54, was sentenced to 11 years in prison -- the longest sentence ever in an insider-trading case -- for his conviction in May on 14 criminal counts. The Galleon case caught many of the fund manager's associates on secretly recorded phone calls.

Gupta's lawyer, Gary Naftalis, said in a statement that there were legitimate reasons for communications between his client and Rajaratnam, including a $10 million investment that Gupta had in a fund managed by the Galleon founder. Gupta lost the entire amount, Naftalis said.

"We are confident that these accusations -- which are based entirely on circumstantial evidence -- cannot withstand scrutiny and that Mr. Gupta will be completely exonerated of any wrongdoing," Naftalis said.

He said Gupta did not trade in any stocks and did not tip Rajaratnam so he could trade.

Manhattan U.S. Attorney Preet Bharara said in a statement that Gupta betrayed the trust he had with top companies.

"As alleged, he broke that trust and instead became the illegal eyes and ears in the boardroom for his friend and business associate, Raj Rajaratnam, who reaped enormous profits from Mr. Gupta's breach of duty," Bharara said.

Some legal experts said that unlike in the case of overwhelming phone-tap evidence against Rajaratnam, prosecutors might have a tougher time convincing a jury of Gupta's guilt.

"How credible is the evidence that he actually disclosed information he knew to be confidential to Rajaratnam? Is this going to be triple hearsay?" asked Michael Kendall, head of the white-collar group of McDermott Will & Emery and a former federal prosecutor. "If there's no financial benefit, that makes it easy to offer up an alternative explanation."

The criminal charges carry a maximum prison sentence of 25 years.

MCKINSEY'S GLOBAL HEAD
Gupta was global head of McKinsey for nine years until he retired in 2007. He won a seat on the board of powerful Wall Street bank Goldman in 2006 and left in May 2010, seven months after Rajaratnam's arrest. He was also a director at P&G and American Airlines Corp.

Gupta was born in India and made his name in the U.S. corporate world after graduating with an MBA from Harvard Business School. Rajaratnam was born in Sri Lanka and became a billionaire through his New York hedge fund business.

The SEC said Gupta had business dealings with Rajaratnam and "stood to benefit from his relations" with him; Gupta was an investor in Galleon entities that "traded -- and handsomely profited -- based on Gupta's illegal tips."

The government contends that Gupta provided Rajaratnam with advance knowledge of Warren Buffett's $5 billion investment in Goldman at the height of the 2008 financial crisis, as well as information about Goldman's surprise fourth-quarter loss in 2008 and its first as a public company, and P&G quarterly earnings in late January 2009.

The accusations were revealed before and during Rajaratnam's trial. Prosecutors previously described Gupta as an unindicted co-conspirator, but had not lodged formal charges.

Goldman Chief Executive Officer Lloyd Blankfein testified at the trial as a prosecution witness about Gupta's conduct on the bank's board. Prosecutors also played secretly recorded telephone conversations to the jury in which Rajaratnam told Galleon employees about information he received from Gupta.

Wednesday's indictment said that on October 23, 2008 Gupta called Rajaratnam 23 seconds after disconnecting from a Goldman board call and spoke to Rajaratnam for 13 minutes, disclosing negative interim earnings results.

In one recording played at the trial, Rajaratnam was on a call with David Lau, chief of Galleon's Singapore branch, on October 24, 2008. They discussed a tip he got from a board member that Goldman was on its way to a surprise fourth-quarter loss, its first as a public company.

"I just heard from somebody who's on the board of Goldman Sachs, they are gonna lose $2 per share," Rajaratnam was heard saying. "So what he (the board member) was telling me was that, uh, Goldman, the quarter's pretty bad."