OKEREKE-ONYUIKE AND HER LEGAL BATTLES 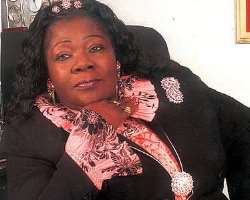 NSE Council members on July 21, 2010 petitioned SEC on the way and manner the Okereke-Onyiuke-Ied executive was running the affairs of NSE. Specifically, they complained of indisciplined spending and financial imprudence threatening financial condition of the NSE, management failure to present audited financial statements for 2009 as at July 2010 and failure to convene Council meetings since March 2010.

On July 28, 2010, SEC, in order to give the former DG the opportunity to clear herself, invited her to make to a meeting schedule for July 30, 2010. Instead of honoring the invitation, on July 29, 2010, she made written representation in response to complaints and failed to turn up for the meeting.

After reviewing her response, on August 3, 2010, the capital market regulatory agency considered it not satisfactory and August 4, 2010, it directed NSE to remove Okereke-Onyiuke from office "forthwith and before resumption of the next trading on the exchange. When the NSE failed to comply with the directive on August 5, 2010, SEC wielded the big tick and removed Okereke- Onyiuke from office, pursuant to the Investment and Securities Act, 2007

Okereke-Onyiuke vs. SEC
Okereke-Onyuike was sacked on August 5, 2010 by SEC, which said it acted in accordance with its powers under the ISA, 2007 over allegations of misconducts on her part, which according to it, were capable of negatively impacting the fortune of the stock market and the image of NSE. It argued that the sack became necessary in order to protect the interest of investors and maintain confidence in the securities market.

But the former NSE's boss, as represented by her counsel, Chief Wole Olanipekun (SAN), challenged the propriety of her removal and, among other things, urged the court to restrain the commission and its agents from treating and relating to her "as a removed DG of the NSE."

The ex-NSE boss, who said she was through with the NSE, having tendered her resignation letter before her sack, stated that she harbours no grudge against her former employer. She said she was neither seeking to be reinstated nor did she intend to disrupt the on-going efforts by the interim management to re-organise and restructure the stock market.

Delivering judgment in the suit instituted by Okereke-Onyuike to challenge her removal, Justice Mohammed Idris not only nullified the sack but described SEC's letter removing her from office as reckless, hasty and done in bad faith. He added that Okereke Onyuike's removal was irrational and did not comply with the condition precedent in removing the plaintiff.

The judge faulted SEC, saying it was wrong for it to withhold the allegation against her, without giving her the opportunity of fair hearing. He added that the commission's action was in breach of Section 308 of the Investment and Securities Act (ISA), 2007. He then awarded the sum of N500 million against SEC as exemplary and aggravated damages for the recklessness, adding that the plaintiff's right to fair hearing was breached by the commission.

SEC, in its notice of appeal filed by the law firms of Aluko & Oyebode and Aelex, is contending that the Justice Idris erred in law when he assumed jurisdiction to hear and determine Okereke-Onyuike's originating summons and her claims and that his judgment was against the weight of evidence before him.

It averred that the judge of the lower court misdirected himself on the facts when he held that the termination of the plaintiff's appointment by it did not comply with section 35(4) and 308 of the Investment and Securities Act, 2007, and that its letter dated August 4 and 5, 2010 violated the plaintiff's right to a fair hearing.

SEC contended that the lower court erred in law when it failed to apply its own previous decision in Danson Izedonmwen and Others vs. Union Bank PIc and for awarding exemplary damages to her. It argued that its request for stay of execution was predicated on its appeal and the notice of appeal appropriately filed before the upper court.

Besides, SEC is challenging the jurisdiction of the court in its appeals and that there are still uncontroverted allegations leveled against Okereke-Onyuike concerning the mis-management and misappropriation of the funds of the Nigerian Stock Exchange (NSE) running into billions of naira.

It stated that being an agency of the federal government, it should not be made to pay huge sums of money until it has exhausted its rights to appeal and that there is a high probability that if judgment is awarded in its favour, Okereke-Onyuike might not be able to refund the huge sum of money awarded to her as exemplary damages.

Many analysts faulted the court's judgment because it was not a dispute regarding a judicial function and that former NSE DG should have been given the opportunity to examine and object to evidence because "the decision is judicial in nature."

Also they disagreed when the court held that that NSE is not a capital market operator and as such, SEC was not supposed to extend its powers there. Meanwhile, Section 308 ISA, 2007 expressly states that SEC has power to remove DG NSE.

The analysts also faulted SEC for holding that SEC was required to give notice of intention to remove the former DG under Section 308, but gave no such notice. SEC, backing the removal of the former DG with evidence, argued that it gave such notice in its letters dated August of 4 and 5, 2010.

They argued that the judge ignored Section 48(1) of the ISA, 2007 regarding its powers to remove NSE DG based on mandatory routine inspection, followed by special investigation.

They contended that SEC has the power to remove without recourse to Board pursuant to Section 35(4) ISA, 2007 and the court ignored clear provision of Section 262(6) of CAMA - "Nothing in this section shall be taken as derogating from any power to remove a director which may exist apart from this section.''

Lagos State vs. Okereke-Onyiuke
A criminal suit was been filed against Okereke-Onyuike at the Lagos High Court sitting in Igbosere. The charges, which were instituted by the Lagos State Government, bordered on stealing and conspiracy to commit fraud.

Others charged alongside the former NSE DG are Lance Elakama, Uzoma Henry Onyekuru and some companies such as Creative Financial Services Ltd, Mining System Ltd, OPDC Properties Ltd, OAK Business, Finance Company Limited and Kingdom Securities, which they are alleged to have substantial interests.

In the two separate charges, which were filed before Justice Christopher Balogun, the accused persons were alleged to have stolen over N3.3 billion from the Exchange. While one of the charges was eight counts, the other was six.

The two separate charges with suit numbers LCD/I 57/2011 and LCD/158/2011, and signed by the Lagos State Director of Public Prosecution (DPP), Mrs. Olabisi Ogungbesan, on behalf of the Attorney-General Lagos State bordered on conspiracy and stealing contrary to Sections 516 and 390 (7) of the Criminal Code of Lagos State Cap C 17, Vol. 2 Laws of Lagos State 2003.

Most of the companies charged alongside the accused persons are alleged to have been owned by them and used as conduit to siphoned monies from the Exchange.

It would be recalled that when the matter came up in court last July, neither Okereke-Onyuike nor any of the defendants were in court, as the police were yet to affect their arrest and bring them to court.

The Principal State Counsel, Femi Adamson had told the court that efforts being made by the police to arrest them had not yielded any positive result.

In suit number LCD/157/2011, it was alleged that Okereke- Onyuike and her deputy, Alhaji Lance Elakama as officers of the Nigerian Stock Exchange and Mining Systems Limited on or about June 20, 2008 at the NSE building, with intent to defraud, conspired to steal the sum of N455 million.

The likely arrest of the former NSE DG may be predicated on the decision of the Justice Ayotunde Philips of the Lagos High Court in Igbosere. The judge, while delivering judgment in the fundamental rights enforcement suit she filed against the Economic and Financial Crimes Commission (EFCC), the Inspector General of Police and the Lagos State Commissioner of Police, restrained all the parties from arresting her.

Okereke-Onyuike, it would be recalled, had filed a fundamental rights enforcement suit against the EFCC, IGP, the Commissioner of Police, Lagos State and the Securities and Exchange Commission (SEC) shortly after she was sacked from NSE. The suit was to prevent her arrest when rumours were making the rounds that she would soon be arrested, detained and charged to court.

The judge, who urged men of the nation's law enforcement agencies to learn from their counterparts abroad, cautioned them against being in a hurry to arrest suspects when they were yet to complete investigation and arm themselves with enough facts and evidence to secure conviction.

A source from the Lagos State Ministry of Justice disclosed that the charges filed against the former NSE DG have shown that the police can arrest her.

"Don't forget that My Lord, Justice Ayotunde Philips, had restrained the EFCC and the police from arresting Prof. Okekeke-Onyuike without first establishing reasonable suspicion against her. With the charges we have filed against her, the police can now arrest her. The charges show that the police have carried out their investigation and have now established the needed 'reasonable suspicion' to arrest;' the source said.

In the same ruling, SEC had hailed the judge's decision, declaring that it can neither be deterred nor prevented from exercising the powers conferred on it by law in discharging its dual mandate of capital market regulation and development.

Speaking through its lawyer, Mr. Babatunde Fagbohunolu (SAN), the commission commended the judge for acknowledging that as a regulatory body, it is not precluded alongside other security agencies from investigating the former Director-General of NSE for the purpose of obtaining redress should they entertain a reasonable suspicion that she had at any time breached any provisions of law or committed infractions of capital market regulations.