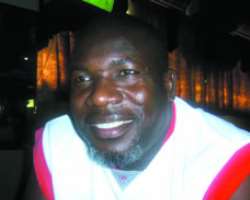 In a meeting held last Tuesday at the national secretariat of Actors' Guild of Nigeria in presence of the stakeholders in Nollywood, journalists, actors and others, the embattled AGN president, Ejike Asiegu has been suspended from the AGN and its activities.

The meeting which took several hours before they made a resolute decision about Ejike's ignominious suspension had Kanayo O. Kanayo, the acting president, Charles Okafor, Emeka Ike, Florence Onuma, Chigozie Atunya, Segun Arinze and others in attendance.
Ejike, though not present at the meeting, his aides who came around, we gathered, have informed him about the new development and he was said to have laughed it over and called them 'unserious people'.

If you recall that, Ejike Asiegu has been holding on to power for more than eight years now and the constitution which was said to have been slightly amended to favour some certain element and his tenure elongation, we learnt, has been considered trash hence the battle for supremacy that has since been rocking the industry.