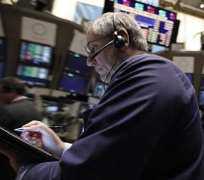 Stocks fell on Tuesday after discouraging corporate outlooks cast a pall over the economy's outlook, while fresh doubts arose about European efforts to find a solution to the debt crisis.

A meeting by euro zone finance ministers on Wednesday was canceled, but European Union and euro zone leaders still planned to hold a summit on the issue on Wednesday as scheduled.

The euro zone's sovereign debt crisis has pressured equities as investors fear its broader threat to the global economy. The S&P has fallen more than 9 percent since a 2011 closing high reached on April 29.

"Everyone thought that with the meeting and summit we had the European situation more or less wrapped up, but the news of the cancellation creates a lot of negatives with respect to a near-term resolution," said Steven Neimeth, a money manager at SunAmerica Asset Management in Jersey City, New Jersey, which manages $9 billion.

Among declining shares, Netflix (NFLX.O) was the biggest percentage loser on the S&P 500, plunging 35 percent for the biggest drop in seven years.

Adding to losses, 3M Co (MMM.N) reported quarterly profits that missed expectations and cut its 2011 forecast. The Dow component said the crisis in Europe was weakening consumer demand and taking a toll on profit, sending shares down 5.2 percent to $77.94. Engine manufacturer Cummins Inc (CMI.N) also fell more than 5 percent after cutting its outlook.

"A majority of companies have been beating earnings and increasing guidance, but when you see bellwether names like these reporting much weaker outlooks than expected, that could cause investors to pause for a while," Neimeth said.

Netflix plummeted a day after the movie rental company said it lost more customers than it anticipated in the third quarter and warned of still more departures. The stock sank to $77.43, the biggest one-day decline since October 15, 2004.

On the upside, Xerox Corp (XRX.N) rose 1.3 percent to $8.10 after its earnings topped expectations.

Data showed U.S. consumer confidence unexpectedly dropped in October to its lowest level in 2 1/2 years as consumers fretted about job and income prospects.

U.S. single-family home prices were unchanged in August, pointing to a market that continued to stabilize but has yet to gain traction, according to the S&P/Case Shiller composite index of 20 metropolitan areas.

About 80 percent of companies traded on the New York Stock Exchange were in negative territory while on the Nasdaq about 74 percent of issues were down.