NOW THAT GADDAFI IS GONE 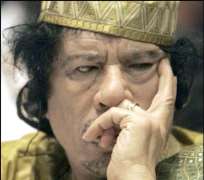 The revolution raging through the Middle East and North Africa has claimed its first presidential casualty, and what a prize. The death of Colonel Mummar Gaddafi of Libya will undoubtedly be a source of indigestion to the strongmen of Syria, Jordan, Bahrain, Yemen, Iran and other countries in that part of the world where the cosmos has been stood on its head by people's power since February this year when an authority-ravaged youth set himself ablaze in Tunisia.

Gaddafi's death will undoubtedly uncork champagne bottles in the West, Israel and even some African countries. The man made too many enemies. USA never forgave him for openly hindering their economic and strategic interests in the Maghreb; they retained long memories of his overt and covert backing of groups classified as terrorist by the US State Department; they never forgot his adventures in the Gulf that made former US president Ronald Reagan send warplanes after the leader. Britain will always recollect how the Irish Republican Army would have gone under if not for Gaddafi's backing; the stiff British upper lip was badly scorched by the 1984 killing of a British policewoman from the Libyan embassy in London. Of course the Lockerbie bombing remained a stain on the Western fabric which only Gaddafi's blood could wash away. Ironically, the US and other Western powers began to see Gaddafi as an ally in their war on terror in the late 1990s and after 9/11. Talk of double-tongued diplomacy. Closer home, Nigeria had always been in Gaddafi's sights since the days of the Shehu Shagari administration. Remember the Chad adventure when he sponsored rebels against the Chadian government and the resultant mayhem threatened Nigeria's northern borders? What of the Libyan connection in training and equipping the then Liberian rebel leader, Charles Taylor, whose forces nearly pulverized the Nigeria-led ECOMOG force? Perhaps the ultimate irritant was Gaddafi's call for the division of Nigeria along religious lines barely three years ago.

While die-hard Afrocentrics and espousers of the destruction of Western imperialism in Africa may want to canonize Gaddafi, ardent advocates of human rights and democracy will regard his demise as one substantial minus to the diminishing clan of brutal African despots. However, his death brings to the fore certain issues that bear upon the Libyan conflict and the convulsions the Arab world has been experiencing since February.

Will the Transitional National Council (TNC) be capable of getting down to the real business of wielding the multiethnic Libya together now that the common enemy who gave the movement a semblance of unity is gone? Recollect that when the rebels of Somalia got rid of Siad Barre in 1991, they tore Somalia apart. Somalia has not recovered since then.

Have the US and NATO, by default, created another Iraq? How capable are Gaddafi's followers of waging a war of attrition against the new helmsmen?

The Arab spring is all about people's power; massive upturning of long-entrenched non-people's regimes, irrespective of the garb they wear: one party states, monarchies, military juntas, even theocratic dictatorships. But this part of the world is rooted in Islamic consciousness and thus susceptible to fundamentalist terrorists who retain the dream of a global caliphate steeped in their brand of religious dictatorship, a dream that is very much alive despite Osama bin Laden's death. Will Libya be a fertile soil for the cultivation of this dream in the post-Gaddafi dispensation?

Let us be frank: it is not that Obama, Cameron, Surkozy and Company loved Gaddafi less; they love his country's oil more. They will never brook a formidable challenge to their sweep across the oil and other strategic mineral ports of Africa; they will not accept rival economic and institutional frameworks standing against the G8's domination of global multilateral institutions and telecommunications. I am not Gaddafi's fan but the truth is that in his bizarre and knee-jerk manner, Gaddafi sought rival paradigms for Africa's development which would move her out of the West's orbit. Sure, his Pan-African rhetoric was close to late Nkrumah's eventual descent into a quest for a personal empire but it was bolder than the spinelessness of many other African leaders who could or would not rise above their neo-colonial restrictions.

Will the TNC become little more than an American and NATO lackey? I have a historical warning for them: the arid sands of Libya breeds ardent nationalists. Omar Muktar, the legend of Libya's war of independence against Italy, became his people's inspiration when he broke ranks with his colleagues who wanted to get into bed with the Italians; Gaddafi's predecessor, King Idris, fell to the young revolutionary in 1969 partly because his government became little more than an extension of the White House and 10 Downing Street. Let the new masters of the universe realize that the dinosaurs have only taken new skins.

It behooves the TNC and their backers to prove they are a cut above the dead dictator by allowing unimpeded UN investigation into how he died, though they may have legitimate security concerns. They should put in place measures for true reconciliation with pro-Gaddafi elements that are ready to renounce violence. Hounding members of Gaddafi's family who might no longer be threats might be counterproductive. Can Gaddafi's wife launch a guerrilla movement from Algeria? Probably not. Let the new leaders live by the standards they have shed blood for: establishment of a people's government in Libya.

To all those African rulers forged in the heat of the anti-colonialist, anti-imperialist and even socialist workshops of the 1960s-1980s; new music calls for new dance steps. Ride off into the sunset with your heads, if not glory, intact because the new generations want people who can speak their language. Gaddafi I never learnt this. I hope the likes of Mugabe of Zimbabwe and Dos Santos of Angola will.