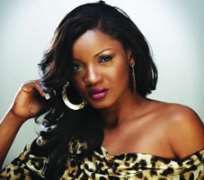 •Omotola
For Omotola, it has been a roller coaster year, from rubbing shoulders with Kimberley Elis on location in Ghana to playing alongside Will Johnson in the UK. The mother of four's international profile has been on the rise all year.

The actress, who recently completed a tour of four countries on a project she is still keeping under wraps, was last Sunday announced as favourite West African Actress of the Year at the reputable Screen Nation Film and Television Award, which held at Indigo O2 Arena in the UK.

The award ceremony was hosted by Angelica Bell and Michael Underwood.  In winning this year's award, Omotola beat other nominees that include Jackie Appiah, Mercy Johnson, Genevieve Nnaji, Ama K. Abebrese, among others. The award further confirms the international brand following of the actress, who is also an ambassador of the United Nations and Amnesty International. Omotola, who had been adjudged West African actress with the highest number of following on the Internet, has been doing so much on the international scene of late.

Her international expedition has taken her to countries like Liberia and Sierra Leone on charity ventures. Her efforts earned her the United Nations and Amnesty International ambassador and an honorary citizen of Liberia; she took to the runway to help draw attention to hunger in some African countries.

The Screen Nation Film and TV Awards is a televised event that takes place in October during Black History Month, and combines the glamour of international movie stars alongside British talent. The awards ceremony, dubbed by the media as 'Black BAFTAs', brings together actors, actresses, directors and filmmakers from the UK international film and TV industry.