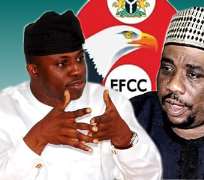 ABUJA, October 21, (THEWILL) – Former Speaker of the House of Representatives, Rt. Honourable Dimeji Bankole and his erstwhile deputy, Honourable Usman Nafada Friday lost their bid to stop their trial in the about N38 billion alleged illegal loan and contract scam suit brought against them by the Economic and Financial Crimes Commission (EFCC).

Justice Suleiman Belgore of the Abuja High Court while refusing to quash the 17-count charges as prayed by Bankole and Nafada, also rejected their application to disqualify EFCC prosecutor in the suit Mr. Festus Keyamo.

Justice Belgore ruled that there is sufficient evidence placed before the court linking them to the alleged crime.

The three applications filed by the accused persons before Belgore are an order to quash the 17 counts charge against them; an order to disqualify the prosecution counsel, Festus Keyamo from prosecuting the case and another one querying the jurisdiction of the court to entertain the case.

Bankole and his deputy, Nafada are standing trial over allegations of criminal breach of trust, by using the House of Representatives account with the United Bank for Africa Plc to indiscriminately obtain loans amounting to over N38 billion and disbursing same without the approval of the Revenue Mobilization Allocation and Fiscal Commission (RMAFC).

At the resumed sitting of the case on today, the presiding judge, in a 56- page ruling posed two questions for determination while dealing on the issue of the prayers of the defence counsel urging the prosecution counsel to disqualify himself. He asked, “Must a prosecutor eschew no bias in a case he is handling? Can a private practitioner institute a criminal matter in the court?

The Judge went further to define bias in the contest of a verb and a noun, adding that, “if the bias is put in the contest of a verb, the prosecution counsel cannot influence my decision, even if he tries, he will fail woefully. The defence counsel should therefore not be worried about the prosecution counsel influencing my decision. The most dangerous bias where the defence counsel should entertain fear is the judicial bias, and that cannot exist in my court.”

Justice Belgore who also pointed out that he has not seen any Supreme Court ruling that said that a prosecutor can’t be biased, adding that, after all, even the defence counsel are also biased as they would naturally want their clients to be freed unconditionally. Citing Section 174 (1) (b) of the 1999 Constitution, the judge said that any person can initiate and prosecute a criminal matter even if the person is not a lawyer, with or without the fiat of the AGF.

“The only caveat in the constitution is that the AGF can take over, either to continue or to discontinue the case. And in this case, the AGF has not said anything close to that,” the judge ruled.

“The course of justice will be better served if the case proceeds to trial as this will afford the accused persons opportunities to defend themselves”, the judge said.

Justice Belgore had on Monday, 25 July 2011, listened to arguments from all the parties for and against the preliminary objections and the eligibility of Keyamo to prosecute the matter as a private prosecutor. The former Speaker, had through his counsel, Chief Adegboyega Awomolo (SAN) asked the Court to disqualify Keyamo from prosecuting him in the charges preferred against him by the anti-graft agency.

He had said that, Keyamo as a private legal practitioner, had once engaged Bankole in battles of allegation of corruption as the Speaker of the House of Representatives, saying, “The prosecution of the allegation against Bankole by Keyamo can neither be objective nor inspire confidence or impartiality and independence as prosecutor.”

Counsel to the former deputy speaker, Nafada, Tayo Oyetibo (SAN) who aligned himself with the submissions of Chief Awomolo urged the court to quash the charges against the accused persons as Keyamo’s action as a private prosecutor was not permissible under the law.

He asked the court to quash the charges on the ground that EFCC had neither statutory nor constitutional power to issue authority to a private prosecutor, to prosecute offences created by or under the Penal Code Act in any court of law, without the fiat of the Attorney General of the Federation.

“There was no AGF in office as at the time the 17-count charge was filed, who could have issued valid fiat to Keyamo. Keyamo has no locus standi to prosecute the matter,” Oyetibo stated.

Keyamo, while objecting to the application, told the court that there is no law that says he cannot be the accuser and be the prosecutor, stressing that it is the duty of a prosecutor to prosecute a criminal case diligently by placing before a court of law all the facts of a case and the duty of being impartial was not that of the prosecutor but that of the court, which is the arbitrator.

Keyamo said EFCC had already been given the power to appoint him as a prosecutor, claiming that he did not need a new fiat from the Attorney- General of the Federation.

Keyamo denied ever accusing Bankole of financial impropriety in his letter to the House of Representatives but only requested him to explain the alleged scam in the purchase of cars for members of the House, saying that the action did not amount to personal attack, vendetta and hatred but the prosecutor’s persistent attitude to make public officers accountable for their action.

The judge who warned all the parties to the case to desist from unnecessary injunctions that could delay the speedy adjudication of the case adjourned till November 21, 22, 23 24 and 25, 2011 for accelerated hearing.

Count one of the charges against Bankole and Nafada reads, “That you Dimeji Sabur Bankole and Usman Bayero Nafada, being Principal Officers of the House of Representatives of the Federal Republic of Nigeria, on or about the 12th day of May, 2010, in Abuja, within the jurisdiction of the High Court of the Federal Capital Territory, did agree amongst yourselves to commit a felony, to wit: criminal breach of trust by agreeing to approve the allowances and/or “running costs” of Members of the House of Representatives in violation of the approved Remuneration Package for Political, Public and Judicial Office Holders by the Revenue Mobilization Allocation and Fiscal Commission and the extant Revised Financial Regulations of the Federal Government of Nigeria, 2009 and thereby committed an offence contrary to Section 97(1) of the Penal Code Act, Cap 532, Laws of the Federation of Nigeria (Abuja) 1990 and punishable under Section 315 of the same Penal Code Act.