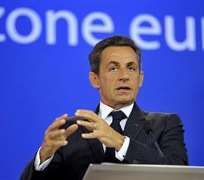 Deep divisions between France and Germany mean they will make scant progress on strengthening the euro zone bailout fund at a summit on Sunday, in a sign that Europe's leaders are still some way from getting a grip on the bloc's debt crisis.

France and Germany said in a joint statement on Thursday that European leaders would discuss a global solution to the crisis on Sunday but no decisions would be adopted before a second meeting to be held by Wednesday at the latest.

The major sticking point is over how to scale up the European Financial Stability Facility (EFSF), a 440 billion euro ($600 billion) fund so far used to bail out Portugal and Ireland.

France and Germany disagree over the best way to bolster the facility, with Paris fearing its triple-A credit rating could come under threat if the wrong method is chosen.

Failure to agree on leveraging the EFSF will further damage confidence in the euro zone's ability to tackle its debt crisis after nearly two years of trying to get on top of a problem that started in Greece and now threatens Italy, Spain and even France.

Underlining the threat the euro zone crisis poses to the broader global economy, U.S. President Barack Obama held a video conference with German Chancellor Angela Merkel and French President Nicolas Sarkozy, reiterating that he hopes a solution will be in place in time for a summit of G20 leaders in France on November3-4.

Merkel and Sarkozy "fully understand the urgency of the issues in the euro zone and are working diligently to develop a comprehensive solution that addresses the challenge and which will be politically sustainable," the White House said.

In their effort to agree a comprehensive resolution plan, euro zone leaders are striving to agree new steps to reduce Greece's debt, strengthen the capital of banks exposed to weak sovereign debt and leverage the EFSF to stem contagion to bigger economies.

The communique, issued after Sarkozy and Merkel spoke by telephone, said Paris and Berlin wanted negotiations to start immediately with the private sector over its contribution to a sustainable plan for Greece's mountainous debt.

The statement from the euro zone's dominant two leaders, who will meet in Brussels for talks on Saturday, suggested little progress had been made in that area either.

Despite the divisions on the EFSF, EU leaders have made headway on another critical element in tackling the crisis -- the recapitalization of European banks -- while a draft statement for Sunday's summit showed euro zone countries will make rules to limit budget deficits and public debt part of national legislation by the end of next year.

EU officials said all 27 member states had agreed that just short of 100 billion euros was required to bolster bank balance sheets, a substantial step forward in attempts to protect the system against the threat of a default in Greece or elsewhere.

"The figure has been discussed with member states. It is now acceptable for everybody," an EU source involved in the discussions said.

Banks will be required to come up with the capital from shareholders first, and if that fails then national governments will provide the support. Only as a last resort will the EFSF be used to recapitalize institutions.

A deal on bank capital clears one hurdle ahead of Sunday, but at least three others remain -- a deal on a revised second bailout package for Greece, the extent of the private sector's involvement in that, and the EFSF's structure.

The International Monetary Fund and the EU also do not see eye-to-eye over the sustainability of Greek debts, with the IMF concerned that EU projections may be too optimistic and that deeper debt reduction is needed, EU sources told Reuters.

Despite the differences of opinion, EU and IMF inspectors are expected to go ahead and approve an 8 billion euro aid payment to Greece next month, the sixth tranche from a 110 billion euro package of EU/IMF loans agreed last May.

Without that payment Greece faces default, possibly dragging the larger economies of Spain and Italy into the mire and sending shockwaves through the European banking system.

A German government spokesman said the second meeting would allow the budgetary committee of the German parliament to consider plans for the euro zone rescue fund. The committee has to consider such plans, according to German regulations.

"The president and the chancellor affirmed their complete agreement to provide a global, ambitious response to the crisis currently facing the euro zone," the Franco-German statement said.

HOW TO SCALE UP
The biggest challenge is agreeing on the method of scaling up the EFSF. France has argued the most effective way of leveraging it is to turn it into a bank which could use funding from the European Central Bank, but both the ECB and Berlin oppose this and the proposal appears to be dead.

Instead, there is an initiative to use the EFSF to guarantee a portion of potential losses on new euro zone debt, a way of trying to restore market confidence and convince investors that Italian and Spanish bonds are safe to buy.

By guaranteeing only a portion, perhaps a third or a fifth, of each debt issue, the EFSF's funds would stretch 3-5 times further, increasing it to around 1-1.5 trillion euros.

But analysts are concerned that such a plan could create a two-tier bond market, with bonds that have guarantees trading at a premium to the secondary market -- an outcome that would likely fuel the turmoil markets are already in.

Markets caught up with the downbeat tone. European shares fell and the euro weakened.

"I don't think they can meet expectations. The summit will fall well, well short of the kind of big bang needed to reassure the markets," said Simon Tilford, chief economist at the Center for European Reform in London.

Guidelines for changes to the bailout fund obtained by Reuters confirmed it will be able to buy bonds on the secondary market once a request from a country is approved by ECB and euro zone finance officials.

FORCED BANK LOSSES?
Adding to uncertainty, EU officials said there was growing acceptance among key euro zone member states that further private sector involvement in Greek debt reduction may have to be forced, not voluntary -- an outcome ruled out up to now.

"Let's be serious, everybody knows that a 50 percent haircut, as Germany is asking for, is not a voluntary move," one EU official said. Leaders will also have to agree on a new bailout package for Greece, one that is expected to be at least 110 billion euros, not including the private sector's role.

In July, banks and insurers agreed to contribute 50 billion euros to reducing Greece's debt via a debt buyback and swap agreement, which equated to a 21 percent writedown. That is now seen as insufficient to make Athens' debts sustainable.

Greece remains mired in recession and its overall debt is forecast to climb to 357 billion euros this year, or 162 percent of annual economic output -- a debt pile few economists believe can be paid back.

While Europe's leaders rush to stop a larger writedown of Greek debt infecting others in the euro zone, ordinary Greeks are raging at the prospect of years more pain as the price of help from international lenders.

Clashes between rival groups of protesters broke out in front of the Greek parliament, interrupting a rally by tens of thousands against a tough new package of austerity measures.

Nonetheless, Greek lawmakers gave final approval for the law cutting wages and hiking taxes, crucial for the country to receive a next batch of bailout funds and avoid bankruptcy.