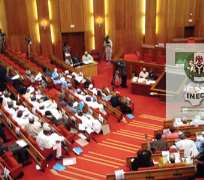 The confirmation of the INEC Commissioner and the eight RECs was sequel to the adoption of report of the Senate Committee on INEC, which had earlier been mandated to screen the nominees contained in a letter forwarded by President Goodluck Jonathan.

Announcing the confirmation of the nominees, Deputy Senate President, Ike Ekweremadu urged them to ensure that their work is done in such a way that the electoral process in Nigeria would be among the best in the world.

On the traffic congestion in Abuja, the Senate asked the FCT to review the master plan of the city with the aim of de-congesting it.

The resolutions on the Traffic congestion was sequel to a motion sponsored by Senator Barnabas Gemade (PDP) and 10 others; titled 'Perennial traffic congestion on entry routes into the FCT, Abuja'.

Leading the debate, Gemade lamented the vehicular gridlock on the three entry routes into the city, (Keffi-Abuja road, Kaduna/Zuba- Abuja road, and Lokoja/Airport- Abuja road) noting its continued infliction of untold hardship on motorists and commuters on a daily basis.

He decried that several hours are spent by commuters to get to their offices and businesses resulting in delay in “official functions, man hour loss with resultant loss of millions of naira in the economy.”

According to him, the lateral states to the FCT have established markets, motor parks and physical developments near the highways shoulders in total disregard of the Federal Highway Regulation of 150 metres.

He commended the efforts of the FCT administration to “manage this serious problem” by expanding the capacity of the routes within the precincts of the city.

Gemade further lamented that buying, selling and other business activities have spilled into the highways, a development both responsible for traffic bottleneck and fatal accidents along the routes.

However Senators during their contributions advocated a long time solution to the transportation system in the city, adding that the creation of additional routes, metro rail system and decongestion of the city would serve as a permanent solution to the menace.