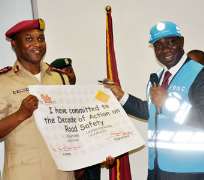 ABUJA, October 19, (THEWILL) - The Corp Marshal of the Federal Road Safety Commission (FRSC) Osita Chidoka Wednesday advocated for tougher fines for intoxicated drivers and those who drive above the prescribed speed limits on roads as he urged for more co-operation with the National Assembly.

Osita who stated this when he visited Deputy Senate President Ike Ekweremadu, however, did not specify the percentage of increase in fines but said existing law limits the FRSC from charging more than N2,000.

He said the Corps had recorded about 2 million traffic offenders across the country and that over 3 million drivers’ Licenses have been issued.

He further explained that the “FRSC neither issues drivers’ license nor number plates” as those are under the purview of the state governments, adding that the Corps only facilitate the processes.

In his speech, Deputy Senate President Ike Ekweremadu hailed the FRSC for distinguishing itself as the most successful government agency saying they have “added value and shown productivity leading to reduced accidents and quick response to emergency calls.”

He noted that the FRSC Act was due for further review, especially in the areas of over speeding and drunkenness.

On the data bank of car license, Ekweremadu said the FRSC should take all data and bio-metrics and drivers’ license applicants to enable appropriate security agencies track down traffic offenders and criminals.

The FRSC boss during the visit decorated Ekweremadu as an honourary Special Marshall of the Corps.