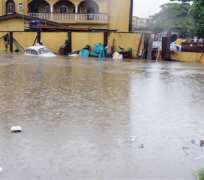 An Action Congress of Nigeria (ACN) youth leader known in the community as Nash was amongst those feared dead.

The Baale of Suberu Oje, Chief Sakiru Subair told journalists today that the floods swept away assets running into millions on naira in Suberu Oje, Oke-Abiye and Sanni Agbesinga communities.

The remains of the dead are yet to be recovered according to the traditional ruler, who urged the Lagos State Government to assist the communities affected.