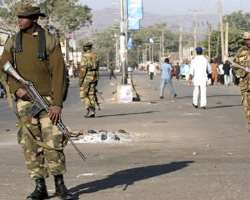 Members of a radical Islamist sect shot dead three people in northeast Nigeria on Wednesday, authorities said, the latest in a string of attacks in the remote region of Africa's most populous nation.

Boko Haram, whose names means "Western education is forbidden", has been behind dozens of shootings and home made bomb attacks in and around Maiduguri, the capital of Borno state, which sits on the borders with Niger, Cameroon and Chad.

The sect is growing in sophistication and authorities in Nigeria and abroad believe it has strengthening ties with al Qaeda's north African wing.

It claimed responsibility for Nigeria's first known suicide bombing in August, driving a car full of explosives into U.N. headquarters in the capital Abuja, killing 24 people.

The attacks on Wednesday were both in Maiduguri.
"One person was killed by the Boko Haram in Mairi ward in the early hours of today while the others were shot dead at about 1pm by Boko Haram," said Hassan Mohammed, an officer in the joint military task force.

"We are still combing the Abbaganaram ward where two people were killed to look for weapons which might have been used to kill the victims."

The joint task force has warned all people carrying illegal weapons to surrender them by Oct. 31 in an amnesty deal or they will be dealt with decisively if found in possession of weapons after that date.