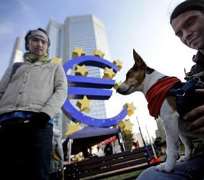 No agreement has yet been reached on scaling up the size of the euro zone's bailout fund to better tackle the debt crisis, two senior European Union officials said on Wednesday.

Dismissing a report in Britain's Guardian newspaper that a deal had been reached by France and Germany to scale up the European Financial Stability Facility by around 5 times to more than 2 trillion euros, one of the sources said: "It's wrong. There is no deal."

A second source said it was not a simple case of multiplying the 440 billion euro capacity of the EFSF to reach a much higher figure.

"It's naive to think you can make those calculations and come up with a nice round 2 trillion figure. It's not nearly as simple as that," he said.

Euro zone leaders meet in Brussels on Sunday to discuss the situation in Greece and are expected to agree on some form of leverage to the EFSF, probably involving using it to guarantee first losses on new euro zone debt issuance.

EU officials have told Reuters any deal is likely to scale up the fund by around 3-5 times, but it would not be the entire amount and would probably increase its firepower at most to around 1.5 trillion euros.