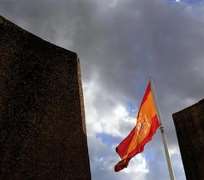 The fresh blow from Moody's Investors Service came just a day after the agency warned France its triple-A rating could be at risk.

"If the euro zone can't figure a way to handle the situation, you are going to see Spanish yields continue to go up, and they are going to have a problem to fund themselves , " said Jessica Hoversen, currency and fixed income analyst at MF Global in New York.

Investors are counting down to a summit of EU leaders this weekend that was originally hailed as a watershed event.

News of the ratings cut snuffed out a sharp rally in shares and the euro that had been sparked by a report suggesting an agreement to strengthen the euro zone's rescue fund.

However, a senior euro zone source poured cold water on the report by Britain's Guardian newspaper that suggested Germany and France had agreed to leverage the fund to over 2 trillion euros as part of a "comprehensive plan".

Moody's cut Spain's bond rating to A1, from Aa2, the third of the major agencies to act in recent weeks and taking it a notch below the ratings of Standard & Poor's and Fitch.

Moody's reasoning made worrying reading for those hoping for a speedy resolution to country's troubles.

"Since placing the ratings under review in late July 2011, no credible resolution of the current sovereign debt crisis has emerged and it will in any event take time for confidence in the area's political cohesion and growth prospects to be fully restored," the agency said.

In the meantime, Spain's large sovereign borrowing needs, heavily indebted banking system and challenging growth outlook left it vulnerable to further downgrades, a judgment that would encompass all too many of EU members.

PLAYING DOWN BREAKTHROUGH
Germany policymakers have been doing their best to play down the chances of a ground-breaking deal anytime soon.

German Chancellor Angela Merkel on Tuesday warned that leaders would not solve the debt crisis at a single meeting.

"These sovereign debts have been built up over decades and therefore one cannot resolve them with one summit but it will take difficult, long-term work. Nonetheless, I do think we will also be able to take relevant, important decisions," she said.

Markets have been on edge for fear European leaders would not agree on a plan to address the crisis, which has already forced Greece, Ireland and Portugal to seek bailouts and has driven up borrowing costs in Italy and Spain.

Greek unions began a 48-hour general strike on Wednesday, the biggest protest in years, as parliament prepares to vote on sweeping new austerity measures designed to stave off default.

France saw its borrowing costs jump on Tuesday after Moody's warned it may slap a negative outlook on the country's Aaa rating in the next three months if slower growth and the costs of helping to bail out banks stretch its budget too much.

Economy Minister Francois Baroin insisted the rating was not at risk but acknowledged that the 1.75 percent growth forecast on which the government had based its 2012 budget was over-optimistic and would have to be revised down.

"The triple-A is not in danger because we will be even ahead of schedule on passing deficit reduction measures," Baroin said on France 2 television.

"We will do everything to avoid being downgraded."
REUTERS