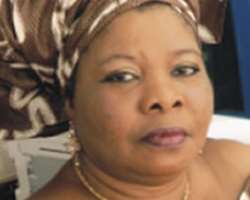 Star actress and wife of the late politician MKO Abiola, Mrs Remi Abiola, who passed on last Wednesday is said to have died of lung cancer in America.

Until her death, Remi was a top actress in the movie scene and her dominance was felt more in the Yoruba genre of the movie industry. She relocated to America last year when she went for an award ceremony organised by The Third Eye, a publication that is now defunct.

She reportedly slumped and went into coma last week. She was rushed to hospital where she was placed on life-support machine. She died Wednesday after the life support machine was unplugged, thereby throwing Nollywood especially, the Yoruba genre into state of deep mourning. She is survived by her family members and two children, out of which one is said to belong to late MKO Abiola.

Remi who used to work for Nigeria Airways as an air hostess, trained in United Kingdom as a stage actor at the Fielding School for Dramatic Arts. Her foray into movies started with television drama that was popular in her time in the 80s and 90s. She started home video in 1989. Her mother roles in Yoruba movie and apt delivery endeared her to many lovers of movies in the industry. She was a household name in the industry until her death.

Her role as Pastor Adeboye's mother in Covenant Church the movie that depicted the life of General Overseer of Redeemed Christian Church of God endeared her to many.

Commenting on the death of the star actress, Mr Charles Novia, the producer of Covenant Church, described her death as devastating and a big shock.

“Her death was a shock to me. It was devastating. I've known her since her days at NTA and she used to encourage me. She was a thorough professional and delivered her roles and lines well. She has featured in two of my movies, Covenant Church and True Love,” Novia said.
For star actress, Rachel Oniga, Remi's death was such a shock that she was short of words. “I don't know what to say, you have to call me back,” she told us on phone.

Association of Theatre Art Practitioners (ANTP), the professional bodyRemi belonged is said to be working out arrangements with her family members here in Nigeria to bring her body home.