YOU CAN'T BURY YOUR MOTHER HERE 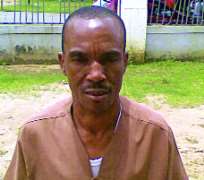 Asuquo
The world seems to be crumbling on Mr. Effiong Okon Asuquo as he has sent in save-our-soul message to Governor Liyel Imoke of Cross River State and the Council of Chiefs calling on them to intervene in lifting the ban stopping him from burying his mother, Madam Iquo Okon Asuquo Awatt, within the community.

Madam Iquo Awatt, 85, nee Aiaha Nkoro Eburutu, died on August 3, 2011 and is yet to be buried because the son, Mr. Asuquo, has been sanctioned by the community for allegedly bringing 'dishonour to the royal home.'

According to the Village Head, Chief Eyibio Asuquo Awatt, 'the sanction on Asuquo, the Royal Prince and former Secretary-General of the Council, will remain in force until the government clears him of the allegations as his actions or inactions as a former school head has attracted disrespect to the community and traditional institution.'

'Consequent upon this, he will not associate again with his lineage nor take part in any traditional ceremonies until he clears from government,' he said.

Worried by the development, Mr. Asuquo, through his counsel, Barrister Austine Igwe of Austine Igwe and Associates wrote to the State Government in a letter dated July 1, 2009 notifying them of the principal's ordeals since his sack by his employer and nothing has been done about the situation.

With the death of Asuquo's aged-mother, he sent a message to the village council to discuss burial arrangements of her late mother in line with the culture and traditions of the community considering the fact that the deceased was of a royal blood. But the village turned back the emissaries and stood by their earlier 'sanctions' until the government absolves him of all the financial misdeeds.

However, Daily Sun investigations revealed that the refusal of the community to allow him accord his mother traditional burial rites has been generating tension and bad blood among community leaders, fuelling speculations that the community may be heading for another round of communal clash.

It was learnt that some elders within the Etong Royal Lineage have questioned the rationale behind not only ostracizing a royal son, but barring him from performing the traditional burial rites of the mother.

Some of Chief Asuquo's supporters have vowed to go ahead and burry Madam Awatt without caring a hoot about the consequences, insisting that 'the deceased was an 'Adagh', the highest traditional title for womanhood, and married to late Obong Okon Asuquo, the former head of the 16 villages constituting the present community and therefore by her genealogy as well as royal command deserve royal burial.'

Fearing that the supporters of the former Secretary-General of the council might take the laws into their hands and burry the late Madam Awatt, the Village Head, Chief Eyibio Asuquo Awatt, in a letter dated August 27, 2011 and addressed to Governor Liyel Imoke, explained that there is need for the government to clear their position on the issue of the dismissed former principal as the publication over his alleged financial crime is still generating heat at the village.

Chief Awatt called on the government to enlighten the community on the truth about Asoquo's matter, disclosing that 'the death of her mother has forced the community to solicit for the clearance for the accused and dismissed former government school principal and community secretary as he cannot be allowed to bury the mother alone.'

It is pertinent to note that Mr. Asuquo's travails started in 2005 when the state secondary school board queried the former Principal of Comprehensive Secondary School, Akpabuyo, for misappropriating undeclared staff salaries of one Mr. Irechukwu Nwosu's unclaimed salaries for over 45-months between 2000 to May, 2004.

In the query signed by Nsa Daniel, the Board Secretary, the board viewed the issue very seriously and directed him to explain why disciplinary action should not be taken against him for embezzling government funds.

DAILY SUN learnt reliably that the principal accordingly made his representation, but was surprised that he was summarily dismissed from service following the recommendations of the joint disciplinary committee.

The dismissal, which took effect from June 1, 2006, was contained in a press statement signed by the permanent Secretary Mrs. Theresa Ikwen, for Commissioner for Education.

In an exclusive interview with DAILY SUN, Mr. Asuquo said it is unacceptable for him to be 'extradited' by his community based on his dismissal by government on allegation of financial impropriety, saying there is no correlation between the traditional institution and his employer.

Narrating his ordeals, he said, 'It is double tragedy for me to lose my job, be sanctioned by community and then barred from burying my old mother who has not committed any offence; I can't understand my offence against my community which I have served for years; now my mother's corpse is lying at the morgue and don't know what next to do. Perhaps, they want me to commit suicide so that they will bury me and my mother together.'

Asuquo disclosed that all the banks where the said salaries were allegedly withdrawn, have written exonerating him of all allegations, insisting that the panel did not even bother to write the banks to reconcile all the accounts.

Frustrated, the former principal Instituted a legal action against the state government claiming a whooping sum of N500 million as damages. Unfortunately, the case in a suit No HC/117/2008 and before Justice E.E Ita was struck off on August 11, 2008.

Family sources told DAILY SUN that Mr. Asuquo, through his counsel, Barrister Austine Igwe of Austine Igwe and Associates had written several letters to the State Government and the community notifying them of the principal's ordeals since his sack and nothing has been done about the situation.