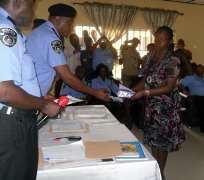 UYO, October 17, (THEWILL) - Families of six policemen who lost their lives in active service in Akwa Ibom State, Monday partook of the state governor; Chief Godswill Akpabio’s benevolence as they were given cash gifts of N1million naira each to enhance their living conditions.

THEWILL checks reveal that no fewer than six policemen were reportedly killed in the state in different battles with hoodlums in the course of discharging their statutory assignments, between July and August 2011.

In the roll call of the policemen who were slain in twos according to the state commissioner of police, Mr. Solomon Arase are; F/No. 347078, Cpl. John Umebugabu and F/No. 372136, Cpl. Vincent Enejere, both of 26 PMF, Uyo, who were both killed along Barracks Road by Brooks street in a gun battle with armed robbers on July, 17th, 2011.

Also, F/No. 375594, Cpl. Moshe Megbe and F/No. 442742, PC Pius Mathew of the same PMF Uyo, both met their untimely death during a fierce gun battle with dare devil armed robbers within the vicinity of the state House of Assembly, along Udo Udoma Avenue on August 19th 2011.

Presenting the cash gifts on behalf of the state governor, the state commissioner of police acknowledged that death was a race that must be completed at some point in life, pointing out that the death of his men occurred in the line of their duty and acts of diligence, extra-ordinary zeal and courage, hence the honour and succour given to them and their dependants.

The state police boss who also honoured each of the deceased with a posthumous award (The Commissioner of Police’s Certificate of Commendation for Gallantry, Dedication to Duty and Zeal) maintained that it behoves the living to honour the dead.

Expressing appreciation on the governor’s gesture, Arase maintained that the gesture was a statement to the fact that the state remains with the command and the bereaved families.

“As I present the monetary award on behalf of His Excellency, Chief Godswill Akpabio, to the families of six deceased officers, I wish to on behalf of the officers and men of Akwa Ibom state police command, appreciate the consistent support, understanding and visionary leadership of governor Akpabio and to assure him that by this honour, the command is re-energised, to advance his vision of a crime free Akwa Ibom State,” Arase pledged.

He however urged families of the deceased to take solace in the fact that their persons died honourably, fighting as professionals and real men and not in dishonour, promising that their deaths were not in vain as they will remain eternal heroes to the command.

The state police boss expressed satisfaction that some of the killers of his men were in police custody even as judgement will soon take its course on them.

“Let me warn those that are still on the run that there will be no hiding place for them in the country as we will pursue them, arrest them and make sure that justice is achieved,” Arase roared.

The next- of- kin to late Cpl. Ekong Imo, Mr. Anifiok Okon who responded on behalf of other recipients expressed appreciation on the state government’s gesture, stating that the amount will go a long way to cushion in assisting the families.