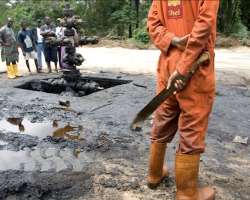 The U.S. Supreme Court agreed on Monday to decide if companies can be held liable in the United States for international human rights law violations, a case about allegations that Royal Dutch Shell Plc helped Nigeria violently suppress oil exploration protests in the 1990s.

The justices said they would hear an appeal by a group of Nigerians who argue they should be allowed to proceed with their lawsuit accusing the oil company of aiding the Nigerian government in human rights violations between 1992 and 1995.

The plaintiffs, families of seven Nigerians who were executed by a former military government for protesting Shell's exploration and development, sought to hold the company liable under a 1789 U.S. law called the Alien Tort Statute.

A U.S. appeals court in New York dismissed the lawsuit on the grounds that corporations cannot be held liable in this country for violations of international human rights law.

Attorneys for the plaintiffs appealed to the Supreme Court, arguing that review was necessary because appeals courts around the nation have issued conflicting rulings on the issue of corporate liability under the more than 200-year-old law.

The Supreme Court is expected to hear arguments in the Shell case early next year, with a decision likely by June.

Attorneys for the plaintiffs said the case raised a host of issues of national and international importance.

The Alien Tort Statute states that U.S. courts shall have jurisdiction over any civil lawsuit "by an alien for a tort only, committed in violation of the law of nations or a treaty of the United States."

'ONLY OPPORTUNITY' TO DETER UNLAWFUL CONDUCT
"For the victims of human rights violations, such cases often provide the only opportunity to obtain any remedy for their suffering and to deter future unlawful conduct," attorney Paul Hoffman said in the appeal.

He said the ruling created blanket immunity for companies engaged or complicit in universally condemned human rights violations, including torture and executions.

In the Shell case, the lawsuit accused the company of violations related to the 1995 hangings of the activist Ken Saro-Wiwa and eight other protesters by Nigeria's then-military government.

Shell has denied the allegations that it was involved in human rights abuses in Nigeria.

Shell's attorney, Rowan Wilson, told the Supreme Court that the appeals court had been correct in dismissing the lawsuit and that further review of the case was unwarranted.

It has been increasingly used in the last 20 years by plaintiffs to sue corporations for alleged involvement in human rights abuses overseas. There have been a number of recent U.S. appeals court rulings on the issue.

In one case, Indonesia villagers accused Exxon Mobil Corp's security forces of murder, torture and other abuses between 1999 and 2001 while in another case Firestone tire company was accused of using child labor in Liberia.

Many of the lawsuits over the past 20 years have been unsuccessful, though there have been a handful of settlements, attorneys involved in the Shell case said.

The Supreme Court also agreed to hear another case that raised a similar issue. The court will consider whether the Torture Victim Protection Act applied only to persons or also applied to the Palestine Liberation Organization.

The case involved a lawsuit against the PLO by the widow and sons of a U.S. citizen, Azzam Rahim, a Palestinian born and raised in the West Bank, who allegedly was tortured and killed in 1995 at a prison in Jericho. The PLO has denied the allegations.