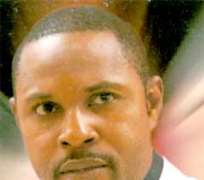 Saidi Balogun is one of the most sought after Nigerian actors. Though he is tilted more to the Yoruba genre, he is a very talented... cross-over actor who has featured in a lot of movies. He delved into music some years ago when he released a Fuji album. When Hazeez Balogun met him at his Allen Avenue office in Ikeja, Lagos, the journalist found out that Saidi is a man on a mission. The fair complexioned actor refused to answer any question about his personal affairs. He seems to be more concerned about charity works. 'Please I don't want questions about when my wife is coming back and all that' he said cheekily before the interview even began.
Is it true that you are involved in a french movie?

Well, that is what I will call creativity. I believe I could put it together, and I really am. It is not that difficult. French is just a language like English. In fact, I am throwing it open now to everyone. I am producing and directing a French movie, anyone who can speak good French, and can act well can be a part of it. I think by the time I finish, the movie will be the first French movie to come out of Nigeria. It is an innovation.

Where is your main target, is it the Nigerian market?

I can assure you that the movie will have an appeal to a lot of people. You know that there are many Francophone countries around us. Many of them watch Nigerian movies despite the fact that they are done in English. Now, imagine what the acceptance will be like when we do the film in French. Even Nigerians will watch it. It will also be sub-titled in English.

My dream in life is to be known everywhere, I don't want to be known in Nigeria alone. That is why I am taking steps that will shoot me into international limelight.

You are involved in an NGO, what is it all about?

Well, I think it is just the kind of person I am. The owner of the NGO, Mrs. Oluyemisi Wada, walked up to me and told me of her plans. At first I did not take any action, I decided to study her outfit without her knowledge. After looking at their operations, I saw that there is a lot of transparency about their dealings. I had always wanted to be involved in taking care of the less privileged, so when I saw that Mrs. Wada was sincere, I decided to work with her.

Also I joined this campaign to say, 'thank you' to God for all He has done for me. He has been kind to me, so I cannot turn a blind eye to sufferings around me. I even survived an accident some years ago, all these are enough to thank the Lord for.

Tell more on what the NGO is about?

There is this boy we are working on. He said he liked to be a soldier because he likes shooting guns. Today, we are working on how to enroll him in the military. Imagine if no one helps such a boy, he says he likes shooting. One day, such a boy will probably end up a hired assassin, or an armed robber. There was also one who ran away for two years, the only reason he ran away was that, he crashed his father's car, and he was afraid to face his father. So for two years, he was on the streets of Lagos. All he needed was someone to help him talk to his parents.

So there are so many cases we are dealing with. At the end, you find out that taking these kids out off the streets, is not that difficult, that is if we just care a little.

There are other actors and entertainers like you who engage in NGOs to make themselves rich, what will you say about these people?

I will say that they are really smart. And the government should get the whole blame. Setting up a Non Governmental Organisation in Nigeria has become so simple. Nobody check mates these people. Nobody investigates what goes on in these agencies. They go on television and solicit for funds, and at the end of the day, they make themselves rich and nobody says a thing about it.

With this, will you blame anyone who tries to do it? When yo can steal and get away with it without any stress. The government needs to set up an agency that checks the activities of these NGO's. Let them know how much they make and how much of these funds actually go into the developmental programmes which they are set out to do.

But on the other hand, any actor or anybody for that matter who makes money out of those who have needs for their own selfish interests, will have a case to answer with God. Such a person and his or her children will pay for it. God does not sleep. It is a deadly game to play.

What is happening to your music career?

My music career is still alive. I am an entertainer. If L.L. Cool J can sing and act, if Wasiu Ayinde can sing and act. Wasiu acted in one of my movies. And many of them out there. Because I have been doing more movies at the moment does not mean that I have left music.

You are yet to release another album after a long while

I would have released an album. It is just that I have so many things on my hands. Have have so much work to do. I almost thought of releasing it this year, but again, charity work is holding me back. The album is ready. It just needs a few touches and then we release it. But music is something you create time for. You should know that there is quality in all I do. I don't want to release an album that has short comings.

In what ways are you involved in this movie?

Well, as an actor and a movie producer, I have decided to do a movie that tells the stories of these kids. Also with the movie, I am trying to lure the kids out of the streets. Many of these street children will be taking part in this movie. We are doing this for them to tell their own stories themselves. We want people to see that these things are really. We want to show the world the circumstances that lead these children to the streets.

Having these street children to act their own movie and tell their own stories, puts originality into the whole thing. You see them first hand. When the movie is out, you will see what I am takling about. I believe it is going to be a touching movie. And the people plus the government will want to do something about the situation. If nothing is done about these children now, what will their future be like? What will they become? Will they be a menace to the society? A stitch in time saves nine.

Your children are also in this movie. What roles are they playing?

What I am trying to tell the whole world is that I am ready use all I have to support this project. It is not about the money alone. I am using my house, my money, my kids, my all to help these children because I am passionate about them. If everyone says that my children cannot act in such a film, who will feature in the movie? In this movie, we need as many kids as possible, so I and my children volunteered to be a part of the movie. After this movie, you probably might not see them in any movie again. But in this one, they are trying to help out as well.

Which other actors will be on this project?

So many. Bimbo Akintola, Jide Kosoko, Olumide Bakare, and a whole lot more have indicated their interest. However, the biggest stars Nigerians should watch out for are the homeless children.