INSIDER ALLEGED: KAFFY ROLLS IN THE HAY WITH P SQUARE 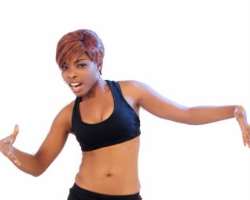 Guinness Book of Records holder, Kafayat Oluwatoyin Shafau a.k.a Kafy is one of the relevant forces in the entertainment industry in Nigeria today to reckon with. The beautiful dancer, having won so many laurels locally and international, no doubt, is a head turner whenever she displays her elegance dance moves. Beyond all these outstanding attributes is an image of a woman that allegedly threw sanity to the wind by rolling in the hay with two brothers, the sensational musical duo, Peter and Paul Okoye diffrently, close sources alleged.

As the story goes, P Square as the Okoyes are called, during the time they came out with their Game Over album, the search that would give one of their tracks, Roll It, a mesmerizing dance steps was on and the articulate and mother of one who runs Zebra Dance Troupe and has her office at the Proflex Fitness Centrre, Ozumba Mbadiwe Street, Victoria Island, Lagos, Kaffy's name was submitted. That, actually began their relationship, but on a platonic level.

As time went by, a very close source reveals that, Kaffy found something of interest in one of the talented Igbo boys, Paul and an amorous affair ensured between them but secretly. That same time, information at our disposal has it that, Peter was also nurturing some romantic ambitions with the dancer. Interestingly, the Okoyes, for the first time, we learnt, failed to disclose their lustful desires to each other because they both didn't want to let go of her without having a 'feel' of her.

While all these wishful thoughts were distorting the minds of the duo, Kaffy, we were informed, was having a swell time with Paul who was at that time lonely because his brother, Peter was already having an affair with Lola Omotayo, the then Celtel Telecommunications big gal who eventually had a baby boy for him. The affair between Paul and Kaffy which was said to be based on secrecy didn't last for long before it crumbled.

The last straw, however, that stained the blossom relationship between the duo and Kaffy, we scooped, was when Kaffy was caught in an uncompromising position with Peter in one of her visits to their house and Jude, their eldest brother had to put a stop to such act so as not to disintegrate the highly respected name in the entertainment industry-P Square. Meanwhile, Peter's 'tempted to touch' rhythm was accomplished and executed, we were told.