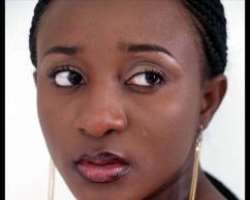 Ever since her million dollar-wedding in far away Houston, United States, and her return to the country few months ago, not much have been heard of top actress, Ini Edo. Neither have her admirers been privileged to behold her face at a Nollywood function. But last Friday proved to be a different story.

Because Ini resurfaced from the blues, being among the star actresses that graced the world premiere of Emem Isong's latest Ibibio language movie, 'Edikan”, which held at Terra Kulture, Victoria Island. Indeed, she was a beauty to behold, sparkling and radiating with happiness throughout the duration of the event.

Dressed in glowing purple-colour evening outfit, Ini was the cynosure of attraction. As soon as she entered the auditorium, the four walls of the place trembled as all eyes immediately turned and fixed on her. Murmured admiration was heard everywhere. Some of her admirers in the audience could not hold back their fascination, with some saying, “She has even slim down, looking more responsible and friendly. Perhaps, she must have been tamed.”

“I am happy for her. She is looking more beautiful and elegant. I pray that her marriage works out, ” added another admirer.

Ini's outfit that evening for anything portrayed her new status as a married woman. For the first time, the adorable actress shunned putting on flimsy or suggestive clothes to the admiration of the audience. To cap it all, Ini was everywhere, hugging and exchanging pleasantries with her fans, colleagues and friends alike. Some of her colleagues that graced the occasion were not left out in admiring her new status.

Cornered by the press, Ini declared, “ I am now Mrs Ini Edo- Ehiagwina . Not much is happening around me at the moment. But I hope to be working on a new project soon.”

Ini played the role of a police officer in the new movie that starred top actors and actresses like Desmond Elliot who directed the movie, Omoni Oboli, Ime Bishop, Nse Ikpe Etim, Ini Ikpe and Moses Armstrong, amongst other stars.

Coming from the stable of Royal Arts Academy, Edikan was inspired by a documentary made by Steppingstones Nigeria 'Saving Africa's witch children' which was broadcast on Channel 4 UK.

The Ibibio language movie, which is subtitled in English, tells the pathetic and moving story of a teenage girl that was sexually abused by her stepfather and later branded a witch, when she dared to speak out.

Co_produced by Uduak Oguamanam, Edikan was made as an attempt to educate and inform parents on the ills of this menace of child witchcraft and sexual abuses with a view to eradicating it. Isong promised to donate a percentage of the proceeds from the sales of the movie to charity homes, adding that, the movie, hopes to prevent recurrent situations of children being labelled as witches through persuasion and education.