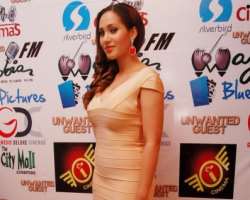 Having been away from the public eye all in an effort to repackage,rebrand and get hold of her marriage,Mulatto beauty,Caroline Danjuma is back on the scene looking very refreshed.Even though the 27 year old has given acting a wide berth,it has not stopped nor prevented her from handling other aspects of movie production,one of which is being an executive producer.

With her music record label through which she nurtured musical acts,Guepard being on hiatus,her imprints are evident in an upcoming movie”In the cupboard” in which she is an executive producer.

The movie which is expected to be out before the end of the year features newly signed on Noble hair ambassador and Globacom ambassador,Ini Edo.