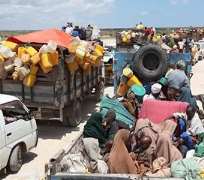 Kenya deployed columns of troops into neighbouring Somalia and launched an offensive against al Shabaab militants on Sunday, helping to drive the al Qaeda-linked militants out of two bases.

A Somali military commander said warplanes carried out a series of air strikes in southern Somalia, much of which is under the control of al Shabaab, suspected by Kenya of kidnapping two Spanish aid workers on Thursday.

The commander could not confirm if the aircraft were Kenyan.

Kenya's government has come under intense pressure at home to show it is beefing up defences along its porous frontier with lawless Somalia in the wake of a spate of attacks on Westerners by gunmen suspected of having ties to the Somali militants.

"There have been air strikes against ... al Shabaab bases near Afmadow late yesterday and today. We are heading towards Afmadow now. Al Shabaab have already vacated the town," the commander, Yusuf Abdi, told Reuters.

"I can't identify the military aircraft, but our neighbour Kenya is fully supporting us militarily and our mission is to drive al Shabaab out of the region," Abdi said.

A senior Kenyan official confirmed Kenyan troops were on Somali soil, a day after Defence Minister Yusuf Haji said Kenya had the right to pursue the enemy inside Somali territory.

"These are criminals, and it's important to indicate we are not at war with the government of Somalia, or with the people of Somalia," Francis Kimemia, permanent secretary at the Ministry of Internal Security, told the private-owned Citizen Television.

UNCOMFORTABLE NEIGHBOUR
East Africa's biggest economy has long cast a wary eye at its anarchic neighbour and its troops have made brief forays across the remote border in the past, but Sunday's assault appeared to mark a concerted military push to drive the rebels away from the frontier.

Thursday's daytime grab of two female Medecins Sans Frontieres (MSF) staff from the heart of the world's biggest refugee camp was the third attack on Westerners in a little over a month.

In the two previous incidents, gunmen seized two elderly women from the north Kenyan coast. The Kenyan government fears any further attacks could deal a crippling blow to the country's lucrative tourism sector.

"The governments of Kenya and Somalia are now cooperating with the fight against al Shabaab, which is an enemy of both countries," spokesman Abdirahman Omar Osman told Reuters by telephone.

Al Shabaab's bloody campaign since early 2007 to topple a Somali government it sees as a stooge of the West has killed tens of thousands of people. The group wants to impose a strict version of sharia law on the nation and more hardline factions are bent on striking Somalia's neighbours.

Kenya's military intervention could raise the risk of a rebel strike on Kenyan interests. The militants have in the past threatened attacks on Kenya's capital, Nairobi, in retaliation for Kenya's training and support of Somalia's army and allied militia.

Late on Sunday, a Kenyan military chopper crash-landed inside Kenya, close to the semi-arid frontier, after conducting air surveillance to track down the militants, residents in the Kenyan town of Liboi said.

"The helicopter flew at high speed from the side of Somalia, suddenly landed at Liboi Primary School, crash-landed," said one local who declined to be named.

Earlier, Kenyan and Somali security officials had met in the Somali border town of Dhobley, less than 25 km (16 miles) from Liboi, to plan the offensive.

Residents living close to the border reported a build up of troops, armoured personnel carriers and tanks late on Saturday.

Al Shabaab has said it is not behind the abduction of the MSF staff from Kenya's Dadaab refugee camp, located about 80 km (50 miles) from Liboi.

(Additional reporting by Dawood Yusuf in Garissa and Ibrahim Mohammed in Mogadishu; Writing by George Obulutsa; Editing by Richard Lough and Myra MacDonald)