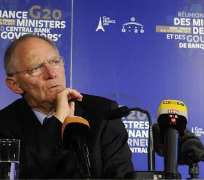 Greece's debt crisis cannot be solved without larger write downs on Greek debt and governments are trying to persuade banks to accept this, German Finance Minister Wolfgang Schaeuble said on Sunday, just days ahead of a key EU summit.

The European Union is under huge pressure to present a plan at its October 23 summit that will decisively addresses the sovereign debt crisis by reducing Greece's debt, stopping contagion and protecting Europe's banks.

But it faces resistance from banks over plans for a greater private sector participation in Greek debt restructuring and moves to force banks to raise capital.

"The details are being discussed now. They don't all have to be ready by the EU summit but the principles must be clear," Schaeuble told German broadcaster ARD.

Schaeuble, like his French counterpart Francois Baroin, was given a stern warning by the world's Group of 20 major economies in Paris on Saturday to act fast and decisively to halt a spiraling crisis which is damaging the global economy.

Asked in the interview with ARD whether there could be a Greek debt write-down of as much as 50-60 percent, Schaeuble said: "A lasting solution for Greece is not possible without a debt write-down, and this will likely have to be higher than that considered in the summer."

In July, private creditors agreed to a voluntary write-down of 21 percent on their Greek debt, a figure which now looks insufficient. Euro zone officials said last week losses are now likely to be between 30 and 50 percent.

"Of course we would like, if possible, to agree together with the banks. That is why we will be discussing things with them. But it is clear, there must be a level of participation which is enough to bring about a lasting solution for Greece. That is enormously difficult," Schaeuble said.

In a separate interview with German broadcaster ZDF, Schaeuble reiterated the need for banks to be recapitalized in order to prevent an escalation of the crisis.

"We need better regulation and we also need a better capitalization of banks, which is what we are doing in the short-term. Not everyone will like it, but it is the best way to ensure that we don't have an escalation in the crisis due to a collapse in the banking system," he said.

"We simply have to recognize that banks don't trust each other at the moment, which is why the interbank market doesn't function as it should. The best means to tackle this is better capitalization," he added.

Some analysts argue however that forcing banks to raise more capital could jeopardize the region's faltering growth.

European Central Bank President Jean-Claude Trichet on Sunday joined the chorus of voices urging Europe's politicians to show resolve, suggesting the European Union's treaty should be changed to prevent one member state from destabilizing the rest of the bloc and calling for stronger governance.