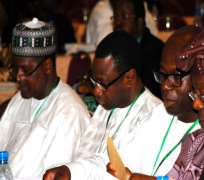 In a communiqué issued at the end of the Presidential Retreat inside State House Saturday, the organized private sector said the petroleum subsidy represented corruption, fraud and a waste of national resources.

“That the majority of Nigerian citizens do not enjoy the benefit of the current subsidy of petroleum product today, rather the subsidy itself operate to the benefits of very few beneficiaries.

“That the financial burden of subsidy is unsustainable and untenable in our nation where critical infrastructure, human and capital development are in dire need of investment.

“We note from the retreat that the federal government of Nigeria has promised to consult widely with the labour organizations, civil societies and other stakeholders to ensure a high level of engagement on the benefit of a deregulated price regime, particularly the impact on the improved livelihood of Nigerians,” the communiqué read by Nduka Obaigbena, promoter of THISDAY newspaper, on behalf of the organized private sector said.

Obaigbena added that 42 of the 45 members representing the private sector at the retreat signed the communiqué.

Speaking on behalf of Nigerian State Governors, Anambra State Governor. Mr. Peter Obi, who also attended the retreat alongside Governors Liyel Imoke (Cross River) and Admiral Murtala Nyako (Adamawa State), said the governors had always supported withdrawal of the subsidy, adding that funds saved following the withdrawal would fund critical infrastructure countrywide. He urged Nigerians to hold government accountable for its use, adding that in the process of building infrastructure jobs would be created.

While the exact cost of the subsidy vary (it depends on who you ask), it is estimated that it costs the Nigerian government more than N900 billion naira annually to subsidize the cost of petroleum products.

But the labour unions have criticized government following its decision to scrap the subsidy. Labour said the masses would suffer dearly if the subsidy is removed.