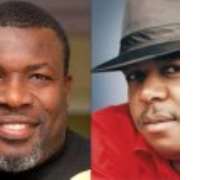 Erstwhile President of Actors Guild of Nigeria (AGN), Ejike Asiegbu and Abuja based Nollywood actor Francis Duru damned the consequences last Saturday as they rose against calls by certain Nigerians that embattled Super Eagles coach, Samson Siasia be removed after he failed to qualify the country for the forthcoming Nation's Cup, holding in Gabon and Equatorial Guinea.

The duo expressed their disappointment at the Transcorp Hilton, saying that those who are calling for Siasia's sack should have a rethink.

In his words, Asiegbu said “Siasia is not the first coach that did not take the country to the Nation's Cup, and as far as I'm concerned, he is a good coach. That we did not qualify for the Nation's Cup does not mean that we have also lost the World Cup ticket.”

“Other country's have lost out in the same away but they did not sack their coaches or overhaul the team. Apart from that, the team is going through a building process and needs time to grow.” “Right now, I think Siasai is the best thing that has happened to Super Eagle and to Nigerian football. And we must support and encourage him and his boys.”

“There is need for us to learn from the mistake and move forward. Why are we always against our team when they fail at tournaments? Why do we always make the coaches the sacrificial lamb? ”

For Francis Duru , “it is sickening , retrogressive and madness for anybody to condemned Siasia. This is why we have not been able to go to the next level in football. Failure and mistakes are bridges to success.”

Meanwhile, if one may ask Asiegbu and Duru, is the pitch another Nollywood affair? Busy body…