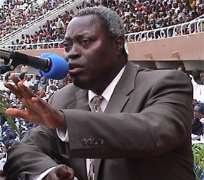 Information available to us revealed that the holiness preacher recently bought a whole street,Oduwaye Street,which lies directly opposite its 30,000 seater cathedral.

Insiders squealed to us that the clergy actually held a meeting with all the landlords at Oduwaye Street and bidded for their property.After much bargaining,we learnt that each of the landlords submitted their offers.

According to our source, there were ten houses on one side of the street while Deeper Life sits on the opposite side.Out of the ten houses, Deeper Life owns two as its children church while six were residential and two were shopping complexes.

We scooped that the least among the landlords accepted an offer of N80 million due to the development of the area while some got about N100 million.

Interestingly, our checks revealed that over N500 million exchanged hands and that the expansion was meant for car park.

Meanwhile, the 30,000 seater ultra-modern headquarters of the ministry is due for completion in 2012.It is a mini stadium and we learnt it cost the church over N3 billion naira.

An Italian firm,Cappa and D'Alberto won the contract for the construction.