Rajaratnam Is Sentenced To 11 Years 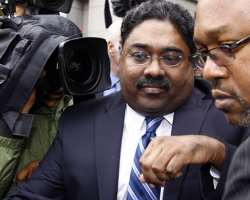 The fallen hedge fund billionaire Raj Rajaratnam received the longest-ever prison sentence for insider trading, a watershed moment in the government’s aggressive two-year campaign to root out the illegal exchange of confidential information on Wall Street.

Judge Richard J. Holwell sentenced Mr. Rajaratnam, the former head of the Galleon Group hedge fund, to 11 years in prison. A jury convicted him of securities fraud and conspiracy in May after a two-month trial.

Calling him “the modern face of illegal insider trading,” prosecutors accused Mr. Rajaratnam of using a corrupt network of well-placed tipsters – including former executives of Intel, I.B.M. and the consulting firm McKinsey & Company – to illicitly gain about $70 million.

“Insider trading is an assault on the free markets,” Judge Holwell said, who also fined him $10 million and ordered him to forfeit $53.8 million.

“His crimes reflect a virus in our business culture that needs to be eradicated.”

Mr. Rajaratnam showed no emotion as Judge Richard J. Holwell read his sentence in a packed courtroom. The 54-year-old Sri Lankan native, who has not spoken publicly since his Oct. 2009 arrest and declined to testify at his trial, did not speak at the sentencing. His wife, absent from the trial, sat stoically in the spectators’ gallery during the hour-long proceeding.

At 11 years, the sentence lacks the symbolic heft of the range of 19 to 24 years that the government had sought under federal sentencing guidelines. At Thursday’s hearing, Reed Brodsky, a federal prosecutor, said that Mr. Rajaratnam deserved an outsized penalty because his crimes were “brazen, pervasive and egregious” and “there is no one who is Mr. Rajaratnam’s equal in terms of the the breadth and scope of his insider-trading crimes.”

In imposing his sentence, Judge Holwell cited a number of mitigating factors that he said caused him to hand down a term that was substantially lower than the non-binding federal guidelines. He noted that Mr. Rajaratnam’s “good works figure into the equation,” citing his financial help for victims of the tsunami in Sri Lanka, the earthquakes in Pakistan and the Sept. 11 attacks.

Judge Holwell also disclosed that Mr. Rajaratnam has advanced diabetes that is leading to kidney failure, and said that prison “is a more intense experience for people with serious health conditions.”

“Some form of forbearance, however constrained by circumstance, is fundamental to our system of justice and appropriate her.” the judge said.

Nevertheless, Mr. Rajaratnam’s historic prison sentence continues a trend of ever-stiffer penalties against white-collar criminals. Legal experts say that the increased prison terms are in part a result of federal sentencing guidelines, passed in 1987, which link the length of a sentence to the dollar amount involved in the fraud.

Historically, judges showed leniency when penalizing corporate criminals because they were not seen as a threat to society and they empathized with people who often came from similar stations as themselves. But gone, for the most part, are the days of slap-on-the-wrist sentences and “country club” prisons where white-collar defendants would serve short stints in relatively comfortable quarters.

Corporate wrongdoers have received record-long sentences in recent years. Bernard L. Madoff is serving 150 years for cheating investors in an epic Ponzi scheme. Lee B. Farkas, a former mortgage company executive, received 30 years for his role in a $2.9 billion bank-fraud scheme. Last month, Adley H. Abdulwahab, who was convicted of participating in a $100 million fraud scheme that preyed on retirees, was sentenced to 60 years in prison.

On the insider-trading front, judges’ penalties have also been severe.

Zvi Goffer, a former trader at Galleon, received a 10-year prison term, matching the longest sentence to date for insider trading. The average sentence of the 13 other defendants connected to Mr.

Rajaratnam’s case has been about three years.

Legal experts say that because prison terms across all federal crimes have substantially increased over the past two decades, it stands to reason that the length of sentences for executives on Wall Street and in corporate American would also grow.

“Often the question is raised, ‘Why shouldn’t crime in the suites be punished as severely as crimes on the streets?’” said Douglas A.

Berman, a law professor at The Ohio State University who teaches sentencing law and policy. “While that sounds like a sound bite, it’s an important question.”

It is a question that played a crucial role in the debate over the appropriate prison term for Mr. Rajaratnam. John C. Dowd, Mr.

Rajaratnam’s lawyer, had asked the judge to impose a sentence closer to six to eight years, calling the government’s request “grotesquely severe.” In arguing for a lesser term, Mr. Dowd noted that a stiff penalty for Mr. Rajaratnam would be on par with the average sentences for violent crimes like kidnapping and sexual abuse.

Advocates of more lenient insider-trading sentences also say that the crime does not have any real identifiable victims, whereas other white-collar crimes such as Ponzi schemes or corporate accounting frauds destroy lives and livelihoods.

Preet S. Bharara, the United States attorney in Manhattan who spearheaded the government’s crackdown on insider trading, disagrees with that view. His office, working in many cases with the Securities and Exchange Commission, has charged 54 people with insider trading crimes during the past two years. Fifty of those individuals have pleaded guilty or been convicted by a jury.

In a series of public speeches, Mr. Bharara has described the illegal exchange of secret information on Wall Street trading floors as “rampant.” He echoed that view in a talk last week at the Wharton School of the University of Pennsylvania, the elite business school from which Mr. Rajaratnam graduated in 1983.

“We’re talking about people, in some instances, who are basically creating a business model for a stable of insider sources,” he said.

“That has been distressing.”
Mr. Bharara also noted the deterrent effect of harsh insider-trading sentences, which are designed to “convince rational business people that the risk is not worth it.”

Another potential deterrent is the unprecedented investigatory tactics and vast resources deployed by federal authorities in their pursuit of Mr. Rajaratnam and his co-conspirators.

For the first time in an insider-trading inquiry, the government used wiretaps to secretly record the phone conversations of hedge fund traders. Mr. Rajaratnam’s cellphone was tapped for nine months during 2008, yielding reams of damning evidence that were used against him at trial.

“One legacy of this case that Wall Street will be more careful about what they say on telephones than they used to be,” said David Siegal, a white-collar defense lawyer and former federal prosecutor at Haynes & Boone.

Mr. Rajaratnam’s lawyers are expected to focus their appeal on attacking the judge’s decision to admit the wiretapped calls as evidence. They will argue, among other things, that Congress has not authorized the use of wiretap surveillance for insider-trading cases.

But most lawyers say that the odds of a reversal are low.

“An appeals court will show great deference to the trial court judge on this issue,” Mr. Siegal said.

When federal agents arrested Mr. Rajaratnam almost exactly two years ago, his case brought to mind the insider trading scandal of the 1980s. Rudolph W. Giuliani, then the top federal prosecutor in Manhattan, brought charges against Ivan Boesky and Michael R. Milken, two of the leading financiers of that era.

The Sri Lankan-born Mr. Rajaratnam represented a new breed of Wall Street power player: The hedge fund tycoon. Over the past decade, these money managers, boasting superior performance and princely fees, became among the most powerful players in global finance, controlling more than $2 trillion in assets. And as their influence and wealth grew – in 2009, Mr. Rajaratnam had a net worth of $1.5 billion, according to Forbes magazine – they attracted attention from regulators.

The government placed Mr. Rajaratnam and his hedge fund, Galleon, which at its peak managed $7 billion, at the center of what it billed as the largest hedge fund insider trading case ever charged. During the trial, federal prosecutors played scores of dozens of phone conversations during which Mr. Rajaratnam exchanged illegal stock tips about companies including Goldman Sachs and Google with corporate insiders and fellow traders.

Mr. Rajaratnam must report within 45 days to the Bureau of Prisons, which will assign him to a correctional facility. Until then, he will be confined to his home, a duplex apartment on Sutton Place. Judge Holwell said he would recommend that Mr. Rajaratnam serve his time at the federal medical center in Butner, N.C., part of the same complex where Mr. Madoff is incarcerated.

Despite the Justice Department’s focus on insider trading, Mr.

Rajaratnam’s case and the government’s broader crackdown have been something of a sideshow to the larger problems related to the global financial crisis and America’s continued economic woes. For instance, insider trading at hedge funds – and the notion that the stock market is a rigged game – does not rate on the list of grievances from the anti-Wall Street protestors spreading across the country.

“Unless people can identify lost money as a result of insider trading, or have had their savings stolen by Madoff, they don’t view their own economic difficulties as being caused by a few bad apples,” said Mr. Berman, the Ohio State law professor. “They see the problems with our economy and financial markets as far more systemic than that.”