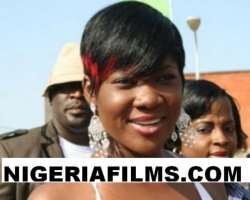 The sexy bare back strapless gown adorned with precious stones is a limited edition designed by Vera Wang . The gown which cost 10,000 dollars was the most expensive garment in the shop located at Johannesburg, the capital city of South Africa.

Mercy also revealed that her she has an option of sending back the dress to the shop she bought it from and the stones will be used to make another dress or jewellery of her choice. Though several stories have been written over the unpertubed and determined actress who has a Cinderella story believes negative stories about her are sponsored by those envy of her rise to stardom.