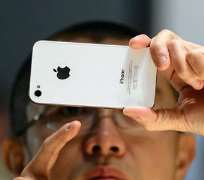 The free iMessage service — which lets iPhone users send messages with text, photos and video to other iPhone, iPad or iPod Touch users — could reduce the revenue wireless carriers generate from texting.

With its latest operating system update, Apple is poised to strike a blow to wireless carriers by making free texting more ubiquitous.

The iMessage service, part of the iOS 5 update released Wednesday, lets iPhone users send messages with text, photos and video to other iPhone, iPad or iPod Touch users — for free.

For wireless carriers, that spells trouble.
"There's a big potential issue here," said Craig Moffett, an analyst at Sanford C. Bernstein. "The wireless industry makes most of its money from high-priced but low-bandwidth services like voice and text."

Texting is hugely lucrative for the wireless industry. It generated about $21 billion in revenue last year and is estimated to grow to $23 billion this year, according to the Consumer Federation of America. Moffett estimated that Verizon Wireless, for example, generates about $7 billion, or 12% of its total annual revenue, from text messaging.

Every year, more than 2 trillion text messages are sent over cellular networks in the U.S. alone. A message costs carriers a fraction of a penny to send, but they usually charge consumers 10 to 20 cents per text or a flat monthly fee for unlimited usage.

In contrast, iMessage uses the carrier's data network or the Internet via a Wi-Fi connection to transmit the text like email. When users send a text to a friend with iMessage turned on, it shows up as a blue chat bubble and doesn't count as a text message in their phone plan. Texting someone with an Android or other non-Apple phone will count as a text message and show up as a green chat bubble.

Free downloadable apps such as textPlus, WhatsApp and Pinger that offer free texting have attracted millions of people who are looking for ways to chat with friends on the cheap. Google Voice and Facebook also offer free alternatives to traditional, paid texting plans.

But analysts say that Apple's clout in the mobile industry could prompt others to follow in its footsteps with easy-to-use texting alternatives.

"I wouldn't be surprised if Microsoft imitated the feature with its operating system," said Roger Entner, an analyst with Recon Analytics.

Analysts say that over time, such moves could erode the amount of money carriers make from each customer, prompting a seismic shift that the industry is already preparing for.

AT&T, for example, recently pared its texting options for new customers down to two: $20 for unlimited messaging or 20 cents for each text sent or received. The company apparently aims to nudge customers into the unlimited plan even if they are not heavy texters.

Because iMessage works only between Apple devices, at least for now, it will probably not persuade people to abandon their texting plans immediately, analysts say.

Instead, Apple probably created iMessage to make it more difficult for iPhone users to switch to another cellphone maker, much like Research in Motion did with BlackBerry Messenger, its free messaging service.

"Apple is building more hooks for people to stay on the platform, since we are rotating out phones every two years," said Colin Gillis, an analyst at BGC Partners. "Everyone is trying to lock you into their ecosystem."