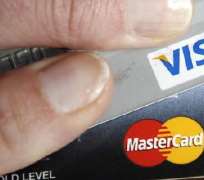 A group representing operators of automated teller machines filed a lawsuit against Visa (V.N) and MasterCard (MA.N) alleging that the credit and debit card issuers violated antitrust laws by fixing the price of ATM access fees.

The suit, which seeks national class action status, was filed on Wednesday in the U.S. District Court for the District of Columbia on behalf of the National ATM Council and several independent ATM operators.

The suit, charging restraint of trade, alleges that Visa and MasterCard network rules prohibit ATM operators from offering lower prices for transactions over PIN-debit networks that are not affiliated with Visa or MasterCard.

It claims that rules by the card issuers prevent an operator from offering consumers a discount for ATM transactions not completed over Visa or MasterCard networks.

"Visa and MasterCard are the ringleaders, organizers, and enforcers of a conspiracy among U.S. banks to fix the price of ATM access fees in order to keep the competition at bay," Jonathan Rubin, of the Rubin PLLC law firm which represents the plaintiffs, said in a statement.

The proposed class, should the case be granted class action status, would be comprised of independent operators of some 200,000 ATMs in the United States, Rubin said.