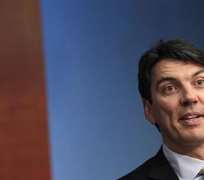 AOL Inc CEO Tim Armstrong has been meeting with top shareholders in the past couple of weeks to push the idea of a sale to Yahoo Inc that could wring up to $1.5 billion of cost savings, according to sources with knowledge of the discussions.

While Yahoo's own strategic review has bumped AOL to the back burner for many on Wall Street, Armstrong is still trying to drum up shareholder support for a deal with Yahoo, presenting it as an alternative to going it alone as an Internet media company.

"The focus in the meeting has gone from a year ago of being around the fundamentals to now being how could you carve this up, what are separate assets worth, are there ways to sell off the business to extract value from them," said a top 20 AOL shareholder who attended one of the meetings.

Armstrong said a merger between AOL and Yahoo could wring out $1 billion to $1.5 billion in savings from overlapping data centers and duplicate news sites, such as sports, entertainment and finance, according to another major shareholder who met with Armstrong.

He is pushing the notion that a combination with Yahoo would appease ad agencies looking for more efficient buys with a bigger audience, said the two shareholders.

They said they liked the idea of a merger with Yahoo but it remains to be seen if Armstrong can pull it off.

Armstrong's defection from Google Inc to AOL in 2009 had raised investors' hopes that he could revive a fallen giant once famous for connecting the world to the Web.

Recruited to AOL for his advertising sales prowess, Armstrong wants to turn the company into one of the top media destinations dependent on ad revenue, after a disastrous 10 year merger with Time Warner Inc.

But so far, that seems elusive when AOL has to compete for advertising dollars against the likes of Facebook and Google, in addition to Yahoo itself.

AOL, Yahoo and Microsoft in mid-September formed an advertising partnership to go up against Google, according to AllThingsDigital blog.

A deal with Yahoo could serve as a way for Armstrong to bow out gracefully. The idea is not new -- it was floated when Microsoft Corp made a bid for Yahoo in 2008, and resurfaced again last year when AOL hired Bank of America and Allen & Co to review alternatives.

"As far as Armstrong's desire for an exit, he doesn't want to be doing what he is doing 18 months from now. He wants to be out," said a source familiar with Armstrong's thinking. "He's an ambitious sort of guy and AOL is such an afterthought. But he would definitely put his hat in the ring to run a combined Yahoo/AOL."

Although Armstrong's performance has disappointed many shareholders, some are not ready yet to pitch him overboard.

"He's in the sixth inning," said the top 20 AOL shareholder. "It is not fair to grade him right now but I think the investment community is a little put off. There is a strong desire to see tangible results."

AOL declined comment for this story.
Yahoo and AOL have many common shareholders as of June 30, including Capital Research, BlackRock, Vanguard and State Street.

Fidelity Management and Research Co, AOL's No. 2 shareholder as of June 30, cut its stake in AOL to 3.7 percent from 10.3 percent according to a regulatory filing Tuesday.

WHAT'S BLACK AND WHITE...
AOL's stock has sunk more than 40 percent since it was spun out from Time Warner in 2009, ending what is widely regarded as one of the worst corporate mergers in history.

What was supposed to be a new media company is looking increasingly old media, similar to newspapers.

Both AOL and newspapers are trying to jump-start digital revenue based on news and information, but both are yoked to legacy assets, the Internet dial-up access business and printing press respectively.

"Dead money" is how another media investment banker described the predicament of the rapidly dwindling dollars derived from dial-up access and print newspapers.

AOL has invested heavily in news, some $160 million so far this year on building out its online local news network Patch and its $315 million acquisition of the Huffington Post.

Subscriber revenue, which represents about 38 percent of AOL's total revenue in the first six months of 2011, is expected to decline 23 percent this year, estimated Benchmark Co analyst Clayton Moran.

Moran forecast that advertising revenue at AOL will grow 1 percent to 2 percent this year.

"There is a race to grow the digital business before the subscription business disappears and right now they are losing that race," Moran said.

There are still some believers in AOL, just as there are in the newspaper business. Dallas based investment firm Hodges Capital Management holds shares in the New York Times Co, Gannett Co and A.H. Belo on the notion there will always be a need for content.

However, when asked if the firm would consider investing in AOL, Hodges analyst Derek Maupin said it was hard to say. "We look at as many ideas as we can. You never know what you are going to turn over."