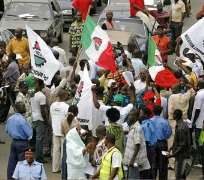 ABEOKUTA, October 12, (THEWILL) – The Ogun State chapter of the Nigeria Labour Congress (NLC) Wednesday commenced a seven-day warning strike over what it described as arbitrary increase in tax in the state.

The decision to embark on industrial action was taken at the Workers’ Parliament held in state capital Abeokuta, following the expiration of a seven-day ultimatum it handed the Governor Ibikunle Amosun-led administration to reverse the implementation of alleged 300 percent tax hike.

The state Chairman of Nigeria Labour Congress (NLC), Comrade Akeem Ambali, who confirmed the commencement of the strike, told THEWILL that it was aimed at pressing home workers’ demand for the abolition of the tax increase and non-remittance of pension deductions, amongst others.

Immediately the strike was declared, labour leaders stormed the State Secretariat in Oke-Mosan part of Abeokuta and sent civil servants packing from their respective duty posts.

Meanwhile, the government through the state Head of Service, Princess Iyabo Odulate has described the strike as illegal urging all workers in the state public service to return to their seats.

But the workers were said to have dismissed the government’s order and instead mobilized themselves chanting anti-government slogans.

They claimed that the current tax policy of the state government was arbitrary and injurious to workers’ welfare.

The workers lamented that the government failed to respond to their demands, despite issuing a 14-day ultimatum followed by another one for seven days which ended on Tuesday.

THEWILL recalls that the peace meeting convened by the state House of Assembly to avert the workers’ strike also ended in a deadlock on Tuesday.

The NLC accused the state government of being insensitive to workers’ plight, saying it failed to implement the relief aspect of the controversial income tax policy.

“They are only concerned about deductions; they did not critically consider the relief aspect of the law. It is not acceptable to the labour that a maximum tax on consolidated salary will be applied on a harmonized salary structure,” Ambali had said.