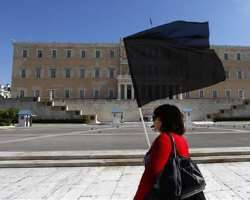 Euro zone countries will ask banks to accept losses of up to 50 percent on their holdings of Greek debt, officials said on Wednesday, as part of a grand plan to avert a disorderly default and try to end a crisis that threatens the world economy.

Ahead of a make-or-break summit of European leaders on October 23 at which a comprehensive new Franco-German crisis plan is expected to be discussed, four euro zone officials told Reuters that a "haircut" of between 30 and 50 percent for Greece's private creditors was under consideration.

That is far more than the 21 percent loss they had asked banks, pension funds and other financial institutions to accept in July as part of a second rescue package for Athens.

Since then, the Greek economy has sunk deeper into recession, fanning fears of an outright default and forcing euro zone leaders to consider more radical action to stem their crisis.

To restore confidence in the banking system, they are also working on plans to shore up the balance sheets of banks through recapitalizations.

European Commission President Jose Manuel Barroso said on Wednesday that the bloc should take a fully coordinated approach to this and only use the bloc's rescue fund, the European Financial Stability Facility (EFSF), as a last resort -- a key demand by Europe's biggest economy Germany.

He also called for a permanent fund to replace the EFSF from the middle of next year instead of in 2013.

Greece's debt mountain is forecast to climb to 357 billion euros this year, or 162 percent of its annual economic output. So far, euro zone governments have failed so far to come up with a convincing plan for how to cope with it.

"We are negotiating in every way to lighten this debt," Greek Prime Minister George Papandreou told a cabinet meeting on Wednesday.

A euro zone official told Reuters the final level for private sector participation had not been set and it was unclear as yet how banks would react to the new demands.

"A voluntary participation is the target, for now at least, and many feel strongly that we must avoid any risk of a full default," the official said, requesting anonymity.

POLITICAL TURMOIL
Two years into a crisis that leaders have warned could plunge western economies back into recession, the 17-nation currency zone is struggling to deliver the "big bang" crisis solution that foreign governments, economists and investors say is needed to stop the rot.

Complicating their task is political turmoil in some member states. Italy is braced for a confidence vote in Silvio Berlusconi's government and Slovak leaders scrambled on Wednesday to secure approval for a stronger EFSF.

The European Union's top economic official said in Dublin that the currency bloc was in a "very dangerous situation" and pressed governments to take strong action at their summit, which was pushed back a week to give leaders time to come up with a new strategy for Greece and their ailing banks.

Inspectors from Europe and the International Monetary Fund gave a green light on Tuesday for Greece to receive an aid payment needed to avert default.

New data on Wednesday showed the country's budget deficit widening. And Greek tax inspectors vowed to strike next week in protest at wage and pension cuts. Much of the country is expected to be shut down by a general strike on October 19.

Despite the turmoil, markets have welcomed a promise by German Chancellor Angela Merkel and French President Nicolas Sarkozy to come up with a "comprehensive plan" for resolving the crisis by the end of this month. The euro pushed up to its top level against the dollar nearly a month on Wednesday.

Sources gave said the two countries still have a long way to go to agree the details of a deal. But in a sign that France might be moving closer toward accepting Germany's position on bank recapitalization, budget minister Valerie Pecresse said France would use public money for this if needed and will not fall back on the EFSF.

Even so, investors worry that political leaders will disappoint markets again at the European and G20 summits.

"If they deliver what they normally deliver, which is well below expectations, then risk assets will sell off and the euro will come under pressure once again," Graham Neilson, chief investment strategist at credit hedge fund firm Cairn Capital, told Reuters.

The Italian leader, who came under renewed pressure to step down last week after suggesting his party rename itself with a vulgar slang term for female genitalia, suffered another embarrassment late on Tuesday when he failed to pass a key budget provision.

Berlusconi planned to address parliament on Thursday, with a confidence vote likely the following day.

"We could have a government crisis at any time and even head toward early elections," Massimo Franco, political commentator for the Corriere della Sera newspaper wrote.

Markets were also looking nervously toward Slovakia, a country of just 5.4 million people -- less then 2 percent of the euro bloc's population -- which is holding up approval of the new powers that governments agreed in July for their rescue fund to buy bonds and recapitalize banks.

After talks on Wednesday with the opposition, however, the outgoing government appeared to have clinched a deal to ensure EFSF ratification by the end of the week and hold an election in March.

The euro crisis has stoked new fears about global growth only three years after the bankruptcy of U.S. investment bank Lehman Brothers unleashed a financial meltdown that plunged the world into recession.

"It almost looks like the world is worrying itself into another recession and that should not be allowed to happen," the company's CEO Klaus Kleinfeld said.