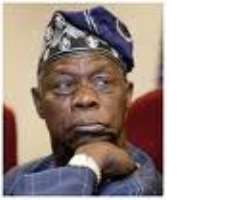 For the second consecutive day, officials of the Nigerian police have raided the offices of Vintage Press Limited, publishers of The Nation newspaper. A staff who witnessed the raid told huhuonline.com the police officers came and ransacked their office for

However,the clampdown on the Nation newspapers has been widely condemned. A media focused non-governmental organization- HUMAN RIGHTS WRITERS' ASSOCIATION OF NIGERIA, [HURIWA] has strongly condemned the arrest by armed security operatives of some senior Editors of the Nation Newspapers on the allleged reported strenght of a petition by the former President Chief Olusegun Obasanjo and stated that the method adopted in the arrest was reminiscent of the dark days of the repressive military and dictatorial regimes even as it has asked the Nigeria Police authorities to either charge them to competent court of law speedly or release them unconditionally with profuse apologies for the psychological torture they were subjected to in the course of the reported arrest.

HURIWA has also advised the President, Commander-in-cheif of the Nigerian Armed Forces Dr. Goodluck Ebele Azikiwe Jonathan to call the hierarchy of the nation's security community to order so that the security operatives would not soil the seemingly good and credible pro-media image that the current administration has built for itself just as it admonished the Federal Government not to allow the former President to unduely enjoy lopsided privileges by making use of the mechanism of the nation's law enforcement agencies to arm twist the editors of the Nation Newspaper in the ongoing dispute over the validity or otherwise of the letter purportedly written and sent to the President by the erstwhile President in which he was alleged to have advised the current federal administration to sack some select heads of some sensitive and high profile Federal agencies.

In the statement made available huhuonline.com and endorsed jointly by the national Coordinator Comrade Emmanuel Onwubiko and the National Media Affairs officer Miss. Zainab Yusuf, the Rights group said the Federal Government must do everything within the law to promote and protect media freedoms in line with constitutional provisions and the recently signed Freedom of Information Act of 2011 just as the group said the current Inspector General of Police Mr. Hafix Ringim must demonstrate evidential proofs to show that he is not a willing tool for the suppression of media freedom and pluralism in Nigeria wich are essential for the full advamncement of democracy, the Rule of Law and respect for the fundamental freedoms and human rights of the citizenry.

According to HURIWA; "we in the human rights community are shocked that few months after the current President endorsed the legendary Freedom of Information Act which is universally accalimed as the best instrument for the promotion of media freedom and real practice of democracy in Nigeria, the reactionary elements in the security community are now seeking to use the brutal repression of editors of the vibrant Nation Newspaper to soil the good image that the current President is building for his administration as the only federal administration in the annals of Nigeria to indelibly make a mark in the promotion and protection of media freedom. We urge the operatives of the security community to desist from the usual overzealous and repressive military tendencies they always generously display each time they are deployed to invite some media practioners for interrogation".

The Rights group said that in compliance with section 36 [5] of the constitution of the federal Republic of Ngeria as amended, the senior Editorial staff of the lagos based media house- Nation Newspapers are innocent in the eyes of the law until proven guilty by the competent court of law in accordance with section 6 of the Constitution and therefore condemns the gestapo style of the reported invassion and arrest of some senior editors of Nation Newspaper as if they are common criminals. The Group also stated that the secutiy operatives must conduct themselves within the scope of the law even if the matter reported to the involves the former President of Nigeria since according to the Rights group all citizens are equal before the law.

Also,   the Action Congress of Nigeria (ACN) has strongly condemned the arrest and detention of four senior editors and other officials of The Nation newspaper, r

In a statement issued in Lagos on Wednesday by its National Publicity Secretary, Alhaji Lai Mohammed, the party said the harassment of journalists for no other reason than for carrying out their professional duties is a dangerous throwback to the past and a blight on the country's democratic credentials.

It reminded the police, which acted illegally in arresting the editors without establishing reasonable suspicion as stipulated by Section 35 of the Constitution, former President Obasanjo who is so eager to get his pound of flesh and President Goodluck Jonathan under whose watch this is happening, that the media fought hard, perhaps more than any other group, for the democracy being enjoyed by all today.

ACN wondered whether Inspector-General of Police Hafis Ringim, who reportedly ordered the arrest of the journalists, would have acted with the same alacrity if the personality concerned is an ordinary Nigerian.

''The Nigeria police force put up a show of force in harassing and detaining harmless journalists. This is typical of the police, which sees itself as beholding to the elite while daily intimidating, brutalising and killing ordinary Nigerians. One can only imagine how successful the police would have been in tackling the security challenges facing the country if it had been employing the same attitude (show of force) in battling armed robbers, kidnappers and Boko Haram elements,'' the party said

It wondered why Obasanjo did not go to court to challenge the paper's story which he found offensive, as he had threatened, instead of petitioning the police as he did.

''Would Obasanjo have done that (petition the police) if he had not been a former President? Is it not possible that he used his status to goad the police into carrying out an illegal act, in line with his trademark disregard for the rule of law? Does Obasanjo remember that he would probably not be alive today were it not for this same media which exposed the plan by the Abacha administration to execute him with dispatch after his conviction over an alleged coup?'' ACN queried.

The party also said President Jonathan cannot escape being blamed for the illegal action of the police under his watch, especially since he has so far not come out to condemn the action of the police in not carrying out an investigation before harassing innocent journalists.

''Under President Jonathan's watch, the judiciary has been hobbled and judges cowed. Is it now the turn of the media to be cowed? Is the arrest of The Nation's journalists aimed at sending a signal to the media that publishing the truth is not enough, and that journalists risk arrest and detention if their stories make the high and mighty in the society uncomfortable?'' it said.

ACN also said it is curious that the Presidency has not come out to say whether or not the contentious letter is in its possession, ''or is the presidency saying, by its silence on this issue, that no such letter exists?''

It warned that the targeting of the judiciary and the media - two institutions that are key to the survival of any democracy - for decimation could spell danger for the nation's young democracy, and call for vigilance on the part of the citizenry if the country is not to be taken down the path of dictatorship.