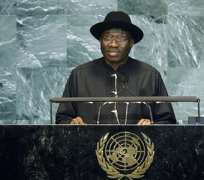 President Jonathan optimistic address to the United Nations Assembly can be a powerful message of positive re-branding and assurance to the world community.

This is not the first time that President Jonathan has addressed United Nations General Assembly. But his recent outing at the at the 66th United Nations General Assembly, UN Headquarters, New York was quite important after the Boko Haram’s United Nations building bombing at Abuja. Many keen political observers and analysts have quite for a while have seen terrorism and terrorist acts accelerating in Nigeria, but they were not probably fazed by rising momentum being that it was localized and within the country's border without international implications.

But the recent attack on the building of United Nations in Nigeria has proven that the bombing might be local but its implication is beyond the confines of the country. There are political and economic ramifications that may come with it especially with the attraction of foreign investors and capitals. This is why it was important that the President Jonathan utilized his address at United Nations Assembly to assure the whole world, that Nigeria is stepping up and Nigeria is up to the challenge of restraining, controlling and defeating the embolden Boko Haram with its destructive warfare on the polity, stability and wellbeing of the country. The world economic actors and participators must be updated on the safety of the country and making them to understand that Nigeria is a safe destination for their capitals and investments. And President Jonathan address did accomplish and convey strength, endurance and safety of the country. That is good news to the world.

The most important responsibility of a government is its ability to protect life and property, and Nigerian president must let the whole world know that prospective investments and present investments in Nigeria are safe and well protected. One thing Nigeria must not do to is to allow anything to disrupt its growing economy and retards its progressive and buoyant economy.

Therefore it is necessary that a confidence building strategy and assurance must go beyond the address at United Nations and rebranding must be continued to make investors and capitalists to see Nigeria as a safe haven for investment, an economic growth landscape with affirmative yields.

President Jonathan in his address at United Nations General Assembly said, "Over the past few months, we in Nigeria have faced an upsurge of terrorist attacks in parts of our country. Only recently, the UN Building in Abuja housing several UN Agencies was the target of an atrocious terrorist attack which left several dead.

On behalf of the Government and people of Nigeria, I like to convey my sincere condolences to the families of the victims and to the entire UN family for this barbaric and heinous attack against those who have dedicated their lives to helping others.”

These are powerful words and that conveyed the country's collective sympathy and condolence to the affected people around the world. The next suitable words to say following that is Nigeria’s readiness to protect lives and investments in the country are unshakeable.

Nigeria must do the public relation of using every opportunity it has to sell herself and rebrand her image as a place for tourism, investments and education. The way a nation perceives herself is probably the way other nations look at her. Moreover, it shows that Nigeria does have the capability to be a secured and a safe nation for capitalism. This may look as something simplistic but it does go a long way in assuring trading partners and nations where a nation priorities lies.

The undeniable implication of terrorism is it does threaten a nation's way of life; subsequently Nigerians are now becoming to paying more attention to themselves and their environments. The easy going way of life and carefree of the country has been altered because of terrorism. The concerns can be felt by seriousness of the country security apparatus to combat this new rising phenomenon. And without doubt it takes time, vigilance and resources to stand up to the new challenge. But while the country is at that, Nigeria must let the world know that business, commercialism, trading are still fertile, safe and profitable in the country President Jonathan made a powerful impression to the world community with the below utterances when he emphasized the fundamental application of good governance for furthering diplomatic and democratic standings: “I also believe that in addition to other traditional tools of preventive diplomacy, democracy and good governance can be particularly important in building a just, equitable and inclusive society.

By focusing on mediation as a tool for conflict prevention, we are able to address the real triggers of conflict, without which we cannot achieve sustainable solutions.

However, for the world to move from a culture of response after conflict to that of a culture of prevention, the international community must muster the political will to promote preventive diplomacy, in particular through mediation. This will necessarily entail re-dedicating greater human and financial resources to institutions and mechanisms that already exist within and outside the UN system for conflict prevention and resolution.

Going forward, I should like to propose the establishment, under the Secretary-General’s Office, a Conflict Mediation Commission, to be charged, among others, with the collation of information on conflict situations across the world, identify the dramatis personae and develop appropriate strategies for initiating resolution of such conflicts. The Commission will also develop rules of engagement, including sanctions which would apply to those who may obstruct efforts to resolve conflicts peacefully.”

Finally, President Jonathan coming to United Nations headquarter in New York at this point in the life of the country is crucial, for it becomes an opportunity to reassure the world community especially the country's trading and diplomatic partners on the readiness of Nigeria to do good and to maintain her standing as an African leader. Nigeria must dispel the false assertion that it is a ‘failed’ nation as some observers chose to characterize the country. To judge the president on his impact and impression on the global village at United Nations with his address, one can equitably give him a excellent grade but now again, only time will tell.