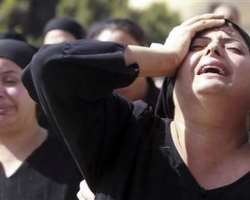 Egypt's Coptic Christians turned their fury against the army on Monday after at least 25 people were killed when troops broke up a protest, deepening public doubts about the military's ability to steer the country peacefully toward democracy.

In the worst violence since Hosni Mubarak was ousted, armored vehicles sped into a crowd late on Sunday to crack down on a protest near Cairo's state television.

Tension between Muslims and minority Coptic Christians has simmered for years but has worsened since the anti-Mubarak revolt, which gave freer rein to Salafist and other strict Islamist groups that the former president had repressed.

But much of the anger from Sunday's violence targeted the army, accused by politicians from all sides of aggravating social tensions through a clumsy response to street violence and not giving a clear timetable for handing power to civilians.

Late on Monday, thousands marched from Cairo's main cathedral to the Coptic hospital where most of the wounded were treated, calling for religious unity and the removal of the head of the ruling military council, Field Marshal Mohamed Hussein Tantawi.

"Why didn't they do this with the Salafists or the Muslim Brotherhood when they organize protests? This is not my country any more," Alfred Younan, a Copt, said near the hospital.

Church leaders called for three days of fasting "for peace to return to Egypt."

The military council told the interim government to investigate the clashes urgently and said it would take necessary measures to maintain security, state TV said.

"This is a huge crisis that could end in a civil clash. It could end in dire consequences," said presidential hopeful Amr Moussa. "An immediate investigation committee must be formed, with immediate results."

"One big problem Egypt faces now is that, increasingly, there is no one in power with the authority and credibility to calm the situation down," said a senior Western diplomat.

"After (Sunday's) events, there is an increasing risk that the military will come into conflict with the people. The authority of the prime minister is dangerously eroded. None of the presidential candidates yet has the standing."

AGITATORS
Christians make up 10 percent of Egypt's roughly 80 million people. They took to the streets after accusing Muslim radicals of partially demolishing a church in Aswan province last week.

They also demanded the sacking of the province's governor for failing to protect the building.

On Monday, mourners packed the Abbasiya cathedral, where Coptic Pope Shenouda prayed over candle-lit coffins of the dead. Many wept and chanted slogans calling for Tantawi to step down.

The congregation wailed as some held aloft bloodstained shirts and trousers. "With our souls and blood we sacrifice ourselves for the cross," they cried.

Some protesters said agitators, whom they described as thugs, sparked violence that prompted the heavy-handed tactics.

The Health Ministry said 25 people were killed and 329 wounded, including more than 250 who were taken to hospital.

Mina Magdy, a doctor at the hospital, said it had dealt with 17 fatalities. Fourteen of the deaths were due to bullet wounds and three were killed when vehicles ran over them, he said.

Streets near the state television building had been largely cleared of debris on Sunday, but smashed and burned vehicles lined streets in the area near the Coptic hospital, which was also the scene of violence overnight.

Prime Minister Essam Sharaf, appearing on state TV in the early hours of Monday, said the government's attempts to build a modern, democratic state were being disrupted by security concerns and talk of plots against democracy.

"We will not surrender to these malicious conspiracies and we will not accept reverting back," he said before the interim cabinet met and launched an investigation into the violence.

GROWING FRUSTRATION
The United States urged restraint and said the rights of minorities and the universal rights of peaceful protest and religious freedom must be respected.

"These tragic events should not stand in the way of timely elections and a continued transition to democracy that is peaceful, just and inclusive," the White House said in a statement.

European Union ministers expressed alarm and said the authorities had a duty to protect religious minorities.

The clashes add to the growing frustration of pro-democracy activists with the generals who took over from Mubarak. Many Egyptians suspect the army wants to wield power from behind the scenes even as it hands day-to-day government to civilians.

The army council denies this.
It has yet to announce a date for a presidential election. A staggered parliamentary vote that lasts till March followed by drawing up a new constitution could push the vote back to the end of 2012 or early 2013, leaving presidential powers in the hands of the military council until then.

Presidential candidate Moussa and other presidential hopefuls have demanded a swifter presidential vote on April 1. Moussa told Reuters it was important that the violence did not derail the election timetable.

Christians complain of discrimination, citing rules that they say make it easier to build a mosque than a church. Tensions have often in the past flared over inter-faith romantic relationships, church building and other issues.

Protests erupted elsewhere in Egypt including its second biggest city, Alexandria. Copts say promises by the new rulers to address their concerns and protect them have been ignored.

"The new emerging faction of Islamists and Salafists has created havoc since the January revolution ... The problem is the severe reluctance of the cabinet and the authorities to enforce the rule of law and protect the Copts," said Youssef Sidhom, editor in chief of Orthodox Coptic newspaper al-Watani.

The cabinet said a fact-finding committee would probe the violence in Cairo and Aswan and laws would be changed to punish religious and other discrimination with prison terms and fines.

It said a committee would speed up the drafting of a new unified law regulating places of worship. Christians have complained that mosques are far easier to build than churches.

Investors, who Egypt is desperate to attract to plug a deep funding shortfall, sold Egyptian shares, pushing the benchmark index down. The index closed down 2.3 percent.