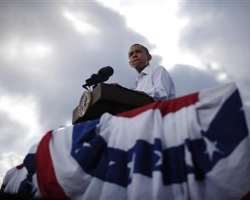 President Barack Obama could create millions of jobs by attracting more foreign capital to the United States, helping entrepreneurs and being more aggressive in energy, business leaders said on Monday.

In a new report, the chief executives of GE, Intel, Boeing and other companies also backed White House proposals to fix infrastructure like airports, railways and electricity grids and to expand broadband Internet networks as a way to boost hiring and speed up flagging growth.

"If Washington can agree on anything, it should be this -- and it should be now," the President's Council on Jobs and Competitiveness said in the report, to be presented to Obama at a meeting in Pittsburgh on Tuesday.

"We never thought there was going to be a silver bullet to create jobs," Immelt told Reuters in a telephone interview.

"What we want to offer the president is a very broad set of ideas that can help more the economy forward," he said. "It's comprehensive and it's specific."

Obama, who faces a tough re-election fight in November 2012 with unemployment high and voters fearful of another recession, has sent his own $447 billion job-creation plan to Congress, where it has hit hurdles over how it will be funded.

The jobs council, which also includes executives from Facebook, Eastman Kodak and DuPont, was created in February to help the White House find ways to promote growth.

Its initial findings in June focused on measures with an immediate jobs impact, like cutting red tape that delays public works projects and speeding up tourist visa applications.

The latest report focuses speeding job creation over a two- to five-year period. It includes proposals the council said "have the potential to create millions of jobs in the years ahead while improving America's competitive standing."

MORE COMPETITIVE
It seeks to bolster entrepreneurship by changing student loan repayment rules for graduates who own or work for new companies and offering visas to foreign-born entrepreneurs who form or join start-ups in the United States.

The jobs council also calls for a speedier process of immigrant visa decisions. It proposes foreign graduates who earn U.S. degrees in science, technology, engineering and math should get green cards offering them permanent residency.

"Delays all too often result in these talented people opting to start or join companies in other countries, where they will compete against American firms," the report said.

It also recommends lower corporate taxes for new companies in their first three years, a reduced capital gains rate for investors buying equity in young firms and other measures to encourage people to launch start-up companies.

The report calls for tax reforms to make it more competitive for companies to locate in the United States, part of an effort to attract more foreign direct investment.

It said rising wage and operating costs in India and China have made the United States more attractive to firms that have shifted their business abroad in recent years but may want to return because of strong U.S. universities and research hubs.

"By capitalizing on these shifts in costs with a more aggressive marketing of America's attractiveness as an investment destination, the United States has an opportunity to recapture lost market share and grow jobs previously lost in tradable sectors," it said.

Some of the ideas, including an infrastructure bank to drum up finance for projects, have been suggested by Obama but not gained the traction needed to clear a divided Congress where Republicans are worried about keeping deficits in check.

Other ideas, including a call for a more aggressive stance on energy extraction, may be hard for the president's fellow Democrats to accept in the run-up to the 2012 election.

The report said environmental concerns about three projects -- the pipeline to transport heavy oil from Canada to Oklahoma and the Gulf Coast, the resumption of deepwater drilling in the Gulf of Mexico and the drilling of shale gas supplies -- had overshadowed their job-creating potential.

"These three streams of private investment could together support or preserve hundreds of thousands of jobs in the next few years," it said, also calling for a new federal financing institution to ensure U.S. energy investments are sufficient for the country to be a global leader in the field.