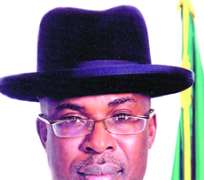 The plot to make Governor Timipre Sylva of Bayelsa State ineligible to contest elections for a second term may have received the backing of close associates of President Goodluck Jonathan who hails from the state, according to Peoples Democratic Party (PDP) sources in both the state capital, Yenagoa and Abuja.

This is creating tensions between PDP stalwarts residing in Bayelsa State who are loyal to the governor and those in Abuja who are believed to be close to the president.

Sources indicated that the president's loyalists, most of who operate from the nation's capital, are working to perfect plans to neutralise Governor Sylva's plans to retain the party ticket by a set of strategies, which include lining up a number of alternative candidates believed to be friendly to both President Jonathan and his wife, Patience.

Although Petroleum Minister, Diezani Allison-Madueke denied any interest in the race, some partisans in the party expressed doubts since they believe she is also in the picture.

Crucial to this strategy, according to the sources, was the anticipated Supreme Court ruling on the five governors who were exempted by the Appeal Court from taking part in the governorship elections in April on the ground that they swore fresh oaths of office in 2008 after rerun elections they won.

The states include Kogi, Bayelsa, Cross River, Sokoto and Adamawa. After the Appeal Court ruling, former Lagos State governor, Burba Marwa challenged the case at the Supreme Court asking to be joined in the suit because he was denied in the lower court.

He wanted to contest for governor in Adamawa State.

If the Supreme Court, expected to rule October 13, does not uphold the positions of the lower court, the governors might be asked to vacate their offices and that would take away the immunity from the governors.

'That is their plot,' said a source. 'If that happens the president's loyalists may cause the anti-corruption agencies to arrest Governor Sylva on excuse of some charges and put him out of circulation until the primaries are concluded.'

The other plan would be to send either the police or soldiers and make it difficult for Governor Sylva's loyalists to operate, so that any candidate supported by the president's men could sail through the nomination and primary processes, according an Abuja source. Apart from the petroleum minister, the other candidates are House of Representives member, Seriaki Dickson and Chairman of the Nigerian Inland Waterways Authority, Chief Turner.

The first move, said the sources, was the disbandment of the state's security outfit, Operation Famou Tangbei, which was set up to contain violence in the state, although police sources said it was involved in extra-judicial killings. The Bayelsa State chairman of the PDP also received a letter from Abuja, indicating that a new election for a new chairman would be held, raising suspicions of plans from the PDP in Abuja to take over the state party machinery.

There are, however, moves from both sides to reconcile the groups but already some groups have begun to express their support openly on either side, especially on the side of Governor Sylva.'Sylva did not carry all of us in the state along with him,' said a source in Abuja who belongs to the anti-Sylva push. 'Bayelsa belongs to all of us,' he said.