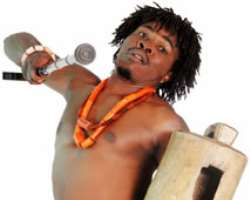 In 2005 when his maiden album entitled Ekwe was released, Sunday Stereo Osakuni, popularly called Original Stereoman Ekwe was set to promote his culture and tradition through music. And when he started appearing on Globacom billboards across the country; Stereoman instantly became a celebrity.

The fourth in a family of five, Sunday Stereo Osakwe, popularly called Original Stereoman Ekwe (Mudiaga Stand Fit), hailed from Ighughu kingdom, in Ndokwa East Local Government Area of Delta State. On his educational background, Ekwe said
“ I have never been to the university, polytechnic or any other institution of higher learning. I only have O Levels, but by the grace of God, I hope to upgrade myself ”.

Although he started singing pop music, he soon changed to reggae, fashioning his act after the likes of Ras Kimono, Orits Wiliki, Majek Fashek and Evi Edna Ogholi. As a reggae singer, the young musician left Delta State for Lagos where he again encountered ragamuffin, another brand of music which made waves at that time and young Ekwe had no option than join the line of music.

According to Ekwe,“ I can't recount all I went through but I pray that upcoming artistes don't face challenges that would be too difficult for them to bear. But with God, everything will be alright”.
The first album by the musician (Ekwe) took the nation by storm and what he simply did was to thank God for answering his prayers.

Although his second album didn't do well in the market when compared to the former, he disclosed his grouse with the music label, which could not make the second album be like the first. Nevertheless he is not leaving any stone unturned in repackaging the album to enable people feel its impact. Today, Stereoman has his own label entitled Angle 90 Record through which his fans can feel his impact.
As a Glo ambassador, Original Stereoman Ekwe said Glo made him a millionaire.“ It is not easy and I feel very happy, great and rejuvenated. I feel positive about my life. This is something I have been planning for and today, people see me in billboards and on television. I feel great and being a Glo ambassador inspires me to do more good things ”.

Asked how he responds to his female fans, the artiste said“ They are our highest numbers of fans. I tried to put myself in order and not just go out with any girl that comes my way”.
Stereoman is happily married to Rekia, the love of his life. Commenting on the prevalence of unsuccessful marriages in the entertainment world, he explained“ I don't pray to be a divorcee. I married my wife because she is the only girl that can live with me. There are many girls out there but within me, I know she is the right woman God has chosen for me.''

Stereoman would not remain stagnant and like every other person, he hopes to take his career to the next level. And when asked where he hopes to be in the next five years he said; “ For me, five years is too far and I don't even know the next minute but I want to see myself growing bigger and higher just as the late Robert Bob Nesta Marley said in one of his interviews. I want to see myself at a bigger level so that people will feel me at higher levels.''

While urging younger artistes to be patient and hard working, the artiste said, 'Everybody wants to make a name but you must be patient to climb the ladder'. The ladder, according to Stereoman, does not have one or two steps. It has many steps leading to one's destination. His words “When you fall, stand and keep moving and at the same time, believe in God and respect your elders. Don't bite the fingers that fed you”.