Who do you blame for the upsurge in commercial sex trade? 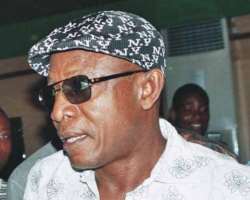 Who do we blame for the upsurge in commercial sex business in the country today? Bridget Amaraegbu gets some notable Nigerians to comment. Read On!

I put all the blame on the government. I mean the day to day activities of our so-called government.

We have political cankerworms who have used so many baptismal names to steal and destroy the God given wealth of this nation. Today, they say it's misappropriation. Tomorrow, it becomes embezzlement. But no matter what name they choose, I still insist it's stealing. We have thieves and area boys in political offices, and that's the problem we have in this country.
See, I don't blame these girls at all. Most of these girls you call prostitutes or commercial sex workers are bread winners of their respective families and homes. Some of them have very sick parents to cater for and prostitution has become their only possible means of making ends meet.

Nkem Owoh, Actor
The amazing thing is that these same 'area boys' in governments have stolen so much money, and they are the ones that mostly patronise these girls. If you are in doubt, please take a trip to some of the so-called celebrities' hangouts, especially in Abuja and you'd understand the level of rot in the society . . ..

It's not like these girls cannot do other things, or get involved in small scale business like salons, fashion houses or perhaps go back to school. The truth is whatever business they desire to go into, they'd require steady supply of power (electricity) Unfortunately, we don't have it.
And for those who managed to set up a small business, the cost of buying a small generator to power their business now becomes another burden.
Now, let's focus a little on a different problem like the fate of the numerous people who have graduated from the universities. No job vacancy. Unemployment has become the national anthem in the country.

And yet, these 'area boys' who call themselves politicians, loot money from this country to invest and enrich other countries, thereby employing the youths of those nations. Where will I start from, and where will I end? I advise that we allow these girls to be.

If God's given natural resources of Nigeria are put into proper use, Nigerian girls will not take to prostitution. No lady will wish to hawk her body.
Have you taken time to ask yourself this question? How many women in the oil, banking and telecommunications sectors are prostitutes? Do they still have time for such things after a hectic office work and fat salary? Okay she you na journalist abi? After spending all day in the office writing stories, you must publish. Will you have the strength to go into prostitution? Prostitution requires a lot of strength and bravery. Yes, it's not an easy job at all. It's very risky and dangerous.

All I'm saying is that our government should create more job opportunities because the little that is available can't accommodate all the Nigerian youth.

They should stop using our money to enrich other nations because those people they enrich will continue to see us as an underdeveloped nation.
There are so many things these 'area boys' who call themselves politicians can do to better the lives of these youth instead of encouraging prostitution with their patronage.

This country can be a lot better than it is today at least for the youths if the powers that be in Abuja will show more concern and tackle the real problems confronting us. Ka Chineke mezie okwu, Amen!

I'll blame the parent of the individual involved because
they did not do their own job as parents. Any child that has the right orientation from home can never prostitute and you can't achieve this by being strict on the child.

Then the individual who has resolved to prostitute, has her own share of the blame because there is a lot other people who have passed through harder conditions but did not go into prostitution.
Then the society is not left out of this blame because peer pressures have destroyed so many youths of today.

If you'll allow me, I'll put all the blame on the individual.
As far as I can tell, being a prostitute has nothing to do with poverty because there are so many people who're going through different stages of financial depression. Yet, they're not hawking their bodies.
In this country today, even the rich are gradually losing their possessions and wealth. So, if you blame it on poverty, then all of us should hawk our bodies because we're all hungry.

It will amaze you to find children of the so-called rich in this same business of prostitution. So how do you justify the blame on poverty?
In today's society, there is so much decadence and most children are no longer brought up to have morals. I mean real value for their bodies.
Another problem with most of our youths is too much want. They want too much of everything, including those things they can't afford. Unfortunately, this group of people does not like to work hard, instead, they prefer the easy way out which they regret in the long run.

I think the society should be blamed. First, things are not done right in this country, so expect the worst, until we begin to think and do things right.

Do you know how some students manage to train themselves in school? A lot of things have gone bad. So, don't blame these girls. The fact that you and I were lucky to have parents who gave us the necessary things of life does not mean every other person is lucky. Please, let's not criticise them but assist and pray for them.

The individual who decides to go into prostitution
should be blamed first before any other thing. Because she could have decided not to do it. Then bad government will also take part of the blame because our society is not favourable to the youths of the country. Go to school and graduate, no job. Even if you decide to go into any small scale business of your own, so many other factors, like the lack of electricity, will not let you succeed. I know that if the government will give us the necessary amenities, this country will be better and our youths will not want to hawk their bodies.

Lack of self discipline is the bane . . . — Bukky Wright, Actress

My dear, I don't want to blame anybody other than the person involved. Today, we live in a society where people are busily wanting to own things that are not within their reach, and that is responsible for the ugly life style of most youths.

Another thing is self discipline. Any person involved in prostitution lacks a lot of discipline. I think people should strive to be more disciplined than seeking for things that won't benefit them at last.