'REFORMS IN THE STATE CIVIL SERVICE IS IN ORDER' 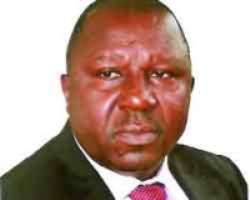 Mr. Umeh Kalu is the Attorney general and commissioner of Justice in Abia state. He speaks to journalists on the State policy of transferring non-indigenous civil servants to their state of origin, the alleged rape at the state university and other sundry issues. LAOLU ADEYEMI was there and reports

WHAT informed the recent civil service reforms in Abia State, especially the retirement of permanent secretaries and the back loading of non- indigenous civil servants to their states of origin?

The reforms in the state civil service are intended to inject fresh blood and ideas into the system. A situation where a permanent secretary or a director will be in office for upwards of ten to fifteen years or even more is unacceptable. By so doing, the younger ones are either frustrated or not given an opportunity to grow in the civil service.

The kernel of the reform is for permanent secretaries and directors not to be in office for more than eight years.

On the issue of non-indigenes, I must say that the general public has been grossly misinformed on the reasons behind the policy. Some years back, Abia indigenes in the civil service of some states within the southeast and south-south geo-political zone, specifically Cross River, Enugu, Imo and the rest were sent back to the State including pensioners who had from Imo State.

These returnee civil servants were absorbed into the civil service of Abia State, even where there were no vacancies in order to save them and their families from the hardship occasioned by their sudden disengagement. They were suggestions then that Abia State Government should equally disengage citizens from the neighbouring states working in their civil service in order to balance the scale.

The suggestion as strong and reasonable as it was to check the over bloated work force, was bluntly rejected by the then governor of the state who was bent on pursuing his now elusive bid for the Presidency of Nigeria. In recent times, the wage bill of the State is nearing N1.8 billion and with the acceptance of government to pay the N18000 minimum wage, the wage bill of the state would in no distant time be N2.5 billion and for a state with a monthly allocation of below N3 billion, one can imagine what crisis would evolve.

Furthermore, the recent crisis in Jos, Plateau State and Maiduguri has displaced hundreds of Abia people who are back to the state and desired to be gainfully employed. The first law of nature is self preservation and what the government has done is to seek for a way of attending to its problems as having a legion of unemployed persons would equally create some social problems for the state especially violent crimes.

What are the findings on the alleged gang rape at Abia State University and do the state have plans of prosecuting the culprits?

The immediate response of government on getting knowledge of the alleged gang rape in the state university was to summon the Vice-Chancellor of the school who is the administrative head for explanation. I am equally aware that government drew the attention of the commissioner of Police to the alleged rape report and ordered him to investigate it.

Preliminary reports from the school authorities yielded no useful clue as to the authenticity of the report as the authorities claimed that no incident of that nature occurred within the campus and that the persons in the said video are not students of the institution. The state commissioner of Police has equally not been able to unravel the identity of the victim nor that of the culprits in the said video episode.

Speaking as the Attorney-General of the state, the entire thing bothering on the widely circulated rape video tape remains in the realm of public conjecture.

In all criminal investigations which will normally culminate to prosecution and eventual conviction or acquittal as the case may be, there must be a complainant in the person of an identified victim and then an identified culprit who is usually the accused person or persons and then finally witnesses who will assist the police in their investigation and eventually give evidence during the trial.

In the case at hand, nobody has shown up as the victim not to talk of identifying the culprits. Here in lies the problem which unfortunately nobody appears to be addressing. I am aware that there is a lot of public outcry and condemnation by the media and human rights bodies over the contents of the video in circulation, but the real concern should be that of giving the police the lead that would lead to the identification and arrest of the individuals in that video clip.

It does not serve any useful purpose to make huge noise about the incident happening in Abia, for crime is crime no matter where it occurs and the concern of everybody should be to ensure that those who run foul of the law are meant to be visited with the full force of the law.

If and when the police conclude their investigations and it is discovered that the said rape incident occurred within the state my office will be willing and ready to prosecute the matter in the interest of the society.

What is the state government's position on the sovereign wealth fund as instituted by the Federal Government?

Their position is not different from the position of the Governors' Forum which is that the Federal Government cannot be said to be saving for States when the States are in dire need of funds to meet pressing obligations.

One can only save from surplus and since most of the States are running on a deficit, it would be foolhardy for their money to be unilaterally withdrawn from the federal allocation into the said fund. While it is wise to save for the rainy day and by extension the future, one must live today in order to reap the savings of tomorrow.

So in a nutshell, the states are saying that the sovereign wealth fund is unconstitutional and does not reflect the tenets of a federal structure which we are practising.

For sometime there has been no report of kidnapping and other violent crimes as was the situation some months ago. How did the state achieve this?

Kidnapping is a thing of the past in the state now. It has been permanently tackled and people can now go about their normal duties without fear of being kidnapped. This feat has been achieved by the doggedness and determination of the governor in conjunction with the relevant security agencies in the country.

There are complaints over the demolition of houses and shops in Aba and its environs. What is responsible for such demolitions by the government?

The ongoing demolitions in Aba and its environs is aimed at restoring Aba to its original master plan which has suffered a lot of abuse in the hands of inordinate businessmen who have turned every space in that town to either a shop or a market place in vagrant disregard of town planning regulations.

You will be amazed at the quantum of government resources that goes into Aba in an attempt to fix the roads and provide basic infrastructures, but because of the disregard for planning regulations, drainages are blocked by unauthorized structures resulting to constant damage of existing roads, thereby negating government's effort in fixing roads in Aba.

No responsible government would allow every building or open space in a city like Aba to be turned into markets and shops. There must be sanity and respect for constituted authority. What the State Government is doing is not novel as same was equally done in Lagos State and even in neighbouring Rivers State with complaints from the residents of the cities, but in the end the demolitions turned out to give a better aesthetics to the cities.

Have you finally resolved the issue of appointment of Chief Judge for the State?

The appointment of the Chief Judge of the state is not a day event, but a process. There are agencies and organs saddled with constitutional duties and obligations in the process of appointing a State Chief Judge.

I must state here without equivocation that we are yet to get a substantive Chief Judge for the State as the first attempt was stalled for reasons which I would not want to recall here. We are getting back to the starting block which is the Judicial Service Commission (JSC) for nomination of a Chief Judge of the State which nomination would be forwarded to the National Judicial Council (NJC) for consideration and recommendation to the governor of Abia State who has the appointing authority and possible confirmation by the Abia State House of Assembly.

Meanwhile, justice delivery system in the State is going on unhindered as the Constitution in its section 271 (4) and (5) envisages the present scenario in the State which is the provision of an acting Chief Judge of the State which we have been taking advantage of.

There has been some legal tussle between the Abia State Infrastructural Development Board and the telephone service provider, MTN. What are the issues involved and what is the government doing to resolve it?

The impasse between the Abia State Infrastructural Development Board and MTN borders on MTN not being willing to meet its civic obligation to the State in the area of tax payment. The Board is statutorily empowered by law to demand and collect infrastructural levy from persons and corporate bodies who do business in Abia State.

MTN is a corporate body and has its facilities for carrying out its business within in Abia State and as such liable just like every other corporate body to payment of infrastructural levy.