Disintegration of Nigeria Is The Cheapest Means To Containing Islamic Extremism In Africa. 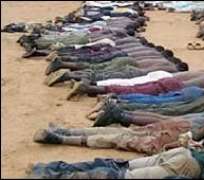 No one ever solves a mathematical equation without a formula; no one finds the solution to a problem without first finding the root of the problem. Terrorism didn't just happen; it is the result of decades, and perhaps, centuries of subdued disagreements and misunderstanding. Wisdom demands that prevention often be preferred to a cure. These truths inform this timely advice to the United States of America, Britain, France, and all other affected countries of the world to accept without delay that, in order to contain this virus called terrorism which is speedily spreading all over Africa, Nigeria must be disintegrated without further delay.

Like a mustard seed, terrorism only has to have a point of contact-no matter how small. Whilst the Nigerian genocide against Igbos from 1967-1970 have remained no business of the world ruling interests (those who champion human rights) to this date, terrorism in Nigeria shall force everyone to ask this very vital and inevitable question which has until now been mumbled in different quarters: “Does Nigeria has to remain one?' Of course, the obvious answer to this is a resounding NO! Setting aside the unthinkable amounts of money which the US and other nations have wasted so far in the fight against terrorism, lives threatened, with no one sure where and who it may be next, pose greater worries for the world at large.

Nigeria, a country with over one hundred and sixty million (160,000,000) people, have proven itself ungovernable as one federal state. A foolish leader is not one who makes a mistake but one who refuses to accept his mistake and learn from it; the amalgamation of Nigeria by her majesty's authority was the worst mistake ever made by the British government. Even with the many lives of Igbos wasted, with the backing of Britain, for no justifiable cause, and the corruption which has corrupted everything in Nigeria, until now, the British authorities have not accepted that their “Project Nigeria” was a fatally destructible and failed one. Nevertheless, Islamic terrorism is about to change all that arrogant denial.

Until now the pursuit of a Biafran state out of this failed project called Nigeria has not won all the duly needed attentions and interventions from the United Nations, America, and the rest of the world. However, it will be noted here that Biafra is not the only nation in Nigeria that wants to secede; the entire Northern states of Nigeria have obtrusively been agitating for their separate state, even before the Nigeria-Biafra civil war, where Sharia law shall be the constitution of the day; and at the other end stands the Niger Delta movement. While MASSOB represents the Biafran movement, MEND fights for the Niger Delta and Boko Haram, the Muslim North. And while MASSOB resorted to a non-violent approach to assert and obtain the rights of Igbo nationhood, MEND uses violence to claim their rights, while Boko Haram diversifies terrorism in Nigeria.

According to Gen. Andrew Owoye Azazi, the Security Adviser to the Federal Government of Nigeria, “Terrorism has come to stay in Nigeria. This was in confirmation of the British secret service's report that Al-Qaeda has planned to use Nigeria as their African headquarters to attack the west. And true to it credentials, Boko Haram, the extension of Al-Qaeda in Nigeria, has now sworn that “the country would not have peace until there is 100 per cent implementation of Sharia law in the country as enshrined in the holy Quran.” This therefore leaves no question as to whether Nigeria will metamorphose into a Pakistan, an Afghanistan, or even another African Somalia; the question the west and indeed the rest of the concerned member states should be asking now ought to be: “Should we let Nigeria evolve into a Somalia, or an Afghanistan, or even a Pakistan in Africa?” Considering the effects of fighting terrorism and mostly the damages it has inflicted so far, the obvious answer to this, again, should and must be a resounding NO!

Having considered the conditions of Pakistan, Iraq, Afghanistan, South-Sudan, and Somalia, I have come to the only wise and workable conclusion and solution to a terrorism-free Africa: A disintegrated Nigeria. If British intelligence claims Nigeria to be the proposed African headquarters of Al-Qaeda, then it could be since the sings are on the increase. One of the many reason large sums of money are wasted and lives lost in combating this international crime is the precautions and cautions taken by America and its allies to avoid killing innocent citizens, and the sole reason terrorism has lasted this long is because those involved take advantage of civilian-populated zones , both to hide and to attack. In the case of Nigeria and, by extension Africa, knowing the source of the problem would lesson the degree of wastes always envisioned and encountered. The economic instability in all of the western countries today is the effect of fighting terrorism-the effect of refusing to prevent from occurring and, instead, preferring to cure when the whole system has been effectively affected. Not everything has immediate cure if and when not initially prevented from occurring. Lastly, I'd like to advice the US and all concerned that, before the decision to send drones or to come in to fight terrorism (which has actually gained legal residence in Nigeria) is made, please help Nigerians to help you. Nigeria has truly shown the final sign of a failed state when it lost the capability to provide security to protect its president; how much vulnerable can an ordinary Nigerian be? But before the west comes in to increase our pains as a means of reducing yours, give us the help we need to reduce yours without having to increase ours; help us to dissolve this lethal mistake of an experiment called the Federal Republic of Nigeria. A stitch in time saves nine.

Disclaimer: "The views/contents expressed in this article are the sole responsibility of Ikechukwu Enyiagu and do not necessarily reflect those of The Nigerian Voice. The Nigerian Voice will not be responsible or liable for any inaccurate or incorrect statements contained in this article."
Articles by Ikechukwu Enyiagu
1-4-2015  Gej And Gmb: What Legacies May Record28-3-2015  Inec And Nigeria's Destiny26-3-2015  Biafra: What Seek Ye?17-10-2014  The Short Story Of Samuel And Saul16-10-2014  The Short Story Of Samuel And SaulMore...