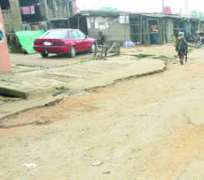 Residents of Ifako-Ijaiye Local Government Area of Lagos State are lamenting the deplorable state of roads in their locality. They are particularly unhappy with the condition of Adeyeri Crescent, off Oyemekun Bus Stop, which they say has remained almost impassable for a long time.

A number of residents who spoke to Daily Sun on the state of the roads want the state governor Babatunde Fashola and Ifako-Ijaiye Local Government Area chairman Alhaji Ademola Doherty to intervene.

They are unhappy that while the state governor was doing its level best to fix Lagos roads in the state but Ifako-Ijaiye Local Government Area was not doing enough to complimented his efforts at road construction and maintenance. According to them, the mega city status aspiration of the state would only be realised when various councils under the it repair roads under their jurisdiction.

Daily Sun investigations revealed that Adeyeri Crescent which is the worst affected in the area was fixed the last time in 1992 during the era of a certain Mr. Ajaguna who happened to be the third chairman of the council. Seventeen years down the line, the road had become, deplorable and almost impassable. Its former smooth surface has been taken over by craters and potholes.

Sources reveals that the road was one of the first to be tarred by the Lagos State Government of in the 1980s.

Alhaji Shamsudeen Sunmonu who is the chairman of Lower Adeyeri Crescent Residents Association (LACRA) and has this to say: 'We have visited the chairman, Alhaji Ademola Doherty, several times, entered into correspondences with him, including the Governor Fashola on the state of this road, but uptill this moment, nothing has been done about it.'

He said having waited in vain for so long, the residents have decided to embark on self-help project to make some part of the road passable. He said work was being done in particular on Bishop Babalola Hughes Street through Odenike Street in the area.

Alhaji Sunmonu described the 1.5 kilometers road as one of the oldest in the area and the most economically viable. His words: 'The road connects users to Haruna and Ogba areas of the state. That is why we are now employing palliative measure to lessen the burden of motorists. So far, a total of N400,000 has been expended by us to block the potholes.

A resident Engr. Taiwo John who has lived in the neighborhood for 36 years urged the council chairman to urgently address the issue of Adeyeri Crescent by fully tarring the road. 'The road is priority to the residents; so many other things will fall into shape if that road is fixed. It is rather sad that government collects N40, 000 tenement levy per annum from us and other taxes, while its civic responsibilities to the people like road maintenance and provision of pipe borne water are left undone. Electricity supply here is a mirage.

Against the back drop of allegations of poor performance leveled against some local government chairmen in the state, another resident Mr Sawal Odenike tasked political parties in Lagos State especially the ruling Action Congress of Nigeria (ACN) not to endorse the candidature of any chairmanship who was not ready to give electorates value for their votes.