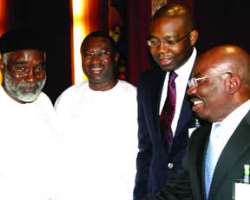 The Presidency has indicated plans to remove the controversial fuel subsidy as from 2012 fiscal year. The Federal Government claimed it was subsidising petroleum products by over N600 billion yearly.

If removed, critics of the fuel subsidy removal argued that the pump price of fuel may rise from its current N65 to between N120 and N150 per litre.

The removal may likely feature in the N4.8 trillion budget estimate President Goodluck Jonathan may present to a joint sitting of the National Assembly in November.

Although no date has yet been set for the budget presentation, the Federal Government is planning a freeze on allocations/overheads as from 2015.

Government is projecting total savings of N1.2 trillion, part of which would be deployed to providing 'safety nets for the poor' in the society as well as provision of infrastructure through the Sovereign Wealth Fund (SWF) .

These proposals are contained in the 2012-2015 Medium Term Fiscal Framework (Medium-term revenue framework and medium-term expenditure framework) and Fiscal Strategy paper submitted by the President to the National Assembly, a copy of which was obtained by Daily Sun on Tuesday.

The MTEF was prepared by the Budget Office in the Federal Ministry of Finance.

In a September 22 covering letter to Senate President David Mark, President Jonathan noted that the submission of the 2012-2015 medium-term fiscal framework and 2012 fiscal strategy paper are 'statutory requirements for submission to the National Assembly under the Fiscal Responsibility Act, 2007.'

The President equally noted that the MTEF was prepared against the backdrop of global economic uncertainties.

Details contained in the MTEF show that a baseline benchmark oil price of $75 would be used for the 2012-2015 budgets with average exchange rate pegged at N153 to a dollar.

The MTEF reads further: 'Government will continue its strategy of fiscal consolidation by which expenditure, particularly on recurrent spending will be reined in and directed to its most productive and growth-enhancing use while efforts will be intensified to increase revenue.

'Although aggregate expenditure is expected to increase from N4.8 trillion in 2012 to N5.18 trillion in 2015, concerted efforts are being made to make savings from overheads as allocations will be frozen in 2015.

'Capital spending will increase marginally from N1.3 trillion in 2012 to N1.6 trillion in 2015 as government intends to leverage on PPP-type arrangements to supplement capital allocations from the budget.

'A major component of the policy of fiscal consolidation is government's intent to phase out the fuel subsidy beginning from the 2012 fiscal year. This will free up about N1.2 trillion in savings, part of which can be deployed into providing safety nets for poor segments of the society to ameliorate the effects of the subsidy removal.

'The accrual to the SWF as a result of the withdrawal of the fuel subsidy will also augment funds for critical infrastructure through the infrastructure window of the SWF.'

In an overview of the performance of the 2011 budget, the MTEF noted that 'NASS passed a budget of N4.972 trillion in March 2011, which was deemed too large and the resultant deficit of 4.23 percent of GDP…'

Also, the report noted that although implementation of the 2011 budget is still on-going, 'reports from the OAGF indicate that the FGN revenue fell below target by N231 billion as of August 2011, mainly due to shortfalls in non-oil revenue as oil revenue receipts were on target.'

Over the 2012-2015 period, government will focus a large portion of its spending on key sectors which include security, infrastructure (including power), agriculture, manufacturing, housing and construction, entertainment, education, health and ICT.

The MTEF and FSP are statutory documents which articulate government's revenue and spending plan as well as its fiscal policy objectives over the period.

The MTEF and FSP is comprised of the macroeconomic framework which gives an analysis of key macroeconomic trends of recent years and provides insight on future policy direction.

The FSP outlines fiscal strategy, analyses expenditure and revenue figures for the years under review, details the assumptions underlying these projections, reviews the previous budget and gives an overview of consolidated debt and possible fiscal risks.