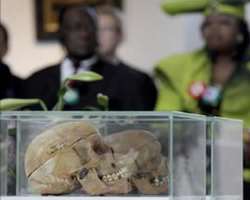 Germany repatriated to Namibia on Tuesday 20 African skulls taken from the area about a century ago when it was under its colonial rule and sent to Germany for questionable racial studies.

After three years of negotiations, Germany agreed to return the skulls of local tribes, the Herero and Nama, that were taken to German research institutions after a 1904-1907 campaign of slaughter that saw tens of thousands killed by their colonial overlords.

The skulls were used in discredited research where the Germans tried to show the racial superiority of Europeans. There are an estimated 300 more African skulls in German universities that Namibia wants brought home.

"We are receiving the mortal remains of our forefathers and foremothers. These mortal remains are testimony to horrors of colonialism and German cruelty against our people," said Prime Minister Nanas Angular at an airport repatriation ceremony.

The Herero and Nama resisted German attempts to take over their land and were gunned down by the thousands. Survivors were forced into concentration camps where many succumbed to starvation and disease, historians said.

Namibia is pressing German to repatriate all the remains taken to the country and pay compensation.

Thousands of Herero people waved red flags and held banners calling for reparations. Many of them had waited since the pre dawn hours of Tuesday at the airport and stormed the airplane when it was on the tarmac.

"There overall has been a strong outcry for reparations," Education Minister Abraham Iyambo told Reuters.