US SENATE BACKS DEBATE ON CURRENCY LAW AMID YUAN ROW 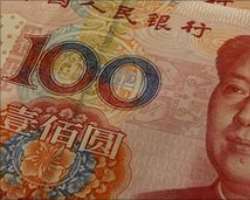 Many argue that the Chinese yuan is undervalued, giving China a massive trade advantage

The US Senate has voted in favour of debating laws which could pressure China to let its currency rise in value.

The bill would give the US government the power to add tariffs to goods imported from countries deemed to be undervaluing their currencies to boost exports.

Some politicians and trade groups say China uses its currency in such a way.

The Chinese government said that it “firmly opposed” the bill.

It accused the US of using the “so-called currency imbalance as an excuse to upgrade the exchange rate further, to take protectionist measures, [which is] a serious breach of World Trade Organisation rules, [and] seriously interfere with economic and trade relations”.

Though the bill does not specifically mention China, it would enable the US government to put punitive duties on a country with a misaligned currency.

'Unfair competitive advantage'
Unlike most other major currencies, China does not allow its currency, the yuan, to float freely on exchange markets. Academics have argued it could be undervalued by as much as 20% – 40% compared to the US dollar.

Stephanie Lester
Retail Industry Leaders Association
China has been accused of keeping the value of its currency artificially low in a bid to make its exports cheaper and more competitive than rivals. At the same time, it also makes goods from abroad more expensive for the Chinese buyers than products manufactured at home.

Many US politicians have said that China's currency policies have not only hurt US businesses but have also had an impact in the job market.

“My colleagues, both Democrats and Republicans, agree that China's deliberate actions to devalue its currency give its goods an unfair competitive advantage in the marketplace,” Senate majority leader Harry Reid said.

“In the last decade alone, we have lost 2 million American jobs to China because of a trade deficit fuelled by currency manipulation,” he added.

The debate on the value of the yuan and its effect on the US economy has been fanned further by a slowdown in the US and fears that it may be slipping into a recession.

At the same time, a high rate of unemployment has also become a huge problem for the authorities as they try to kick start growth in the world's biggest economy.

Unilateral approach?
A commitment by a government to maintain its currency at a fixed value in relation to another currency. Sometimes pegs are used to keep a currency strong, in order to help reduce inflation. In this case, a central bank may have to sell its reserves of foreign currency and buy up domestic currency in order to defend the peg. If the central bank runs out of foreign currency reserves, then the peg will collapse.

Pegs can also be used to help keep a currency weak in order to gain a competitive advantage in trade and boost exports. China has been accused of doing this. The People's Bank of China has accumulated trillions of dollars in US government bonds, because of its policy of selling yuan and buying dollars – a policy that has the effect of keeping the yuan weak.

Glossary in full
The US and China's other trading partners have been putting pressure on China to let its currency appreciate. While Beijing has allowed its currency to rise in the past 12 months, its critics have said that the appreciation has been too little.

However, China has maintained that a sudden rise in the yuan's value would not only hurt its export sector but also have a detrimental effect on its overall economy.

Critics of the currency bill warned that any such law may negate efforts for a cordial agreement with China.

The Emergency Committee for American Trade said the bill was “a highly damaging unilateral approach that will undermine broader efforts to address China's currency undervaluation”.

Others have argued that the US has created its own economic problems and that antagonising the Chinese could potentially provoke a trade dispute which would be even worse for the economy.

“Using anti-dumping and countervailing duties to address currency valuation is misguided and could lead to a trade war,” said Stephanie Lester of The Retail Industry Leaders Association.

“Sparking a trade war with China – one of our largest and fastest growing export markets – could have disastrous consequences for American companies and workers, and for our economic recovery,” she added.

The passing of the procedural vote allows debate to take place for the rest of the week in the Senate.

However, even if it passes the upper house of Congress, the bill could get stalled in the House of Representatives.

Republican leaders are not seen as too keen on the bill and the Obama administration has been wary about how the proposed law would be perceived in China.