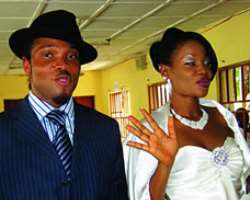 Unknown to most Nigerians, when reggae dance hall king, African China, sang Forgive Me in his last album, he was actually asking for Maryam, his lover to forgive him for his alleged sexual indulgence with a white girl during a trip to the United Kingdom.

And unknown to many, the lady in question had been a long standing lover, now married to the Umuahia, Abia State born reggae musician.

So, last Thursday, at exactly 12.30 a.m., doctors at the Holyfield Hospital located in FESTAC Town welcomed, through the beautiful Nasarawa- born wife of African China, a baby girl, whom the star musician has already named Princess.

China, as he more fondly called by friends and fans, in a phone call, told this writer that although he was prepared for the news, he was actually surprised that, “My wife, who had gone for a mere ante-natal check up, was confined to bed by the doctor who insisted her time was due.”

Was he in the theater to stand by the wife, Showtime sought to know?

“No. I couldn't stand the trauma my woman was going through. So, I quietly waited and prayed for her and the child outside while the birth process lasted.

I thank God that they sailed through and today, I'm a proud father of a daughter.

The girl is God's way of bringing back my mother whom I lost, when I was just two years old,” an elated China disclosed.

On his feeling and relationship with his wife who is currently a final year student at the Nasarawa State University, China disclosed that, he had “always prayed to God to give me a partner that I will love and cherish for ever.

In my upcoming album, I dedicated a song to my wife and prayed to God that I want to wake up every morning to find her by my side.

And this prayer is already working in my favour, as the new baby seems to the instrument God has used to bring good tidings to my family.”

At the Holyfield Hospital, mother and child were in great shape and healthy when this writer visited.

Maryam's auntie, who is currently playing the role of the mother (her mother was said to have travelled abroad for medical check up), told Showtime she was happy. “God is good,” she said